Winding drum elevators are an older type of elevator. Elevator cars are pulled up by means of rolling steel ropes attached to a drum, that wind around the drum. The weight of the car is usually balanced by a counterweight. In some cases, there are 2 counterweights. One attached to the car, and one attached directly to the winding drum. Winding drum elevators started to lose popularity in the 1920s, and are no longer allowed to be installed since 1955, except for freight elevators traveling 40 ft. or less, and traveling 50 FPM or less, though it is unknown if any manufactures still make winding drum machines for commercial elevators. This is most likely because if the final limit switch fails, the elevator will keep going, even when it hits the top of the shaft, and the motor will not stop, which can damage the elevator, the building, or even possibly cause the elevator to free fall. Winding drum machines are still allowed for home elevators and short distance dumbwaiters. Winding drum elevators appear to be designed for slow speeds. Winding drum elevators are very rare to see, because of how long they have not been allowed to be installed, and that they are often replaced with traction machines during modernization.

Winding drum machines are usually single-speed, and are powered usually by DC, or maybe in some cases AC electric motors. The electric motor in this design drives a worm-and-gear-type reduction unit, which turns the hoisting sheave. The gear reduction offers the advantage of requiring a less powerful motor to turn the sheave. An electrically controlled brake between the motor and the reduction unit stops the elevator, holding the car at the desired floor level. 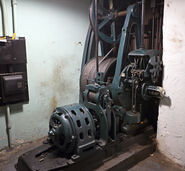 Retrieved from "https://elevation.fandom.com/wiki/Winding_drum_elevators?oldid=50075"
Community content is available under CC-BY-SA unless otherwise noted.