Unlucky floor numbers are usually meant for some cultures that recognizes some numbers meant for bad things, such as death, in Chinese. Elevators in some region usually omit unlucky numbers and replace with another number (except the building owners don't care about this like Public Housing Estate blocks built by Hong Kong Housing Authority).

Examples of unlucky floor numbers that usually omitted in elevators

All numbers ending with four (4)

In Chinese culture, fourth floor is usually omitted from most elevator fixtures in a Chinese building, this is because the number means "death (死)". It was considered that the number 4 in Putunghua means "sì" while death is "sǐ" and Cantonese means "sei3"[1] while death is "sei2"[2]. Both of these words are nearly homophonous. Some buildings in Asia skipped the fourth floor either by numbering it as "5" or by designating the floor as "3A" or something similar. In some buildings in South Korea, fourth floor is labelled "F" (Four) instead of 4 in elevators[3]. The practice of avoiding instances of number 4 is called Tetraphobia.

In the Chinese culture, 14 is considered more unlucky than the individual 4, since 14 sounds like "will certainly die (實死)" in both Putunghua and Cantonese. Some buildings in Asia simply numbering it as "15" or "12B" or even "13A".

4th floor is usually omitted from most elevator fixtures in a Chinese building, this is same goes to the common 13th floor and the Chinese unlucky number 14.

Sometimes, fourth floor is replaced with another floor number, for example, Lobby ("L") or Mezzanine ("M", see next photo) is being the fourth floor.

An elevator button panel with fourth floor numbered as "3A".

An elevator button panel with fourteen floor numbered as "13A".[4]

Notice the fourth floor is labelled as "3B". 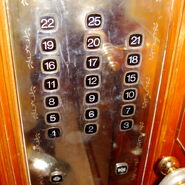 The 4th floor is omitted, this is same goes for the common 13th floor, the Chinese unlucky number 14 and 24.

Another elevator button panel without 13th and 14th floor buttons.

An elevator button panel skipped 4th floor and the Chinese unlucky number 14 and 24.

In Chinese culture, floor numbers between forty (40) to forty nine (49) may also be considered as unlucky floor numbers.

An example of this practice is found in Aryaduta Suites[6], and in The Energy[7], Jakarta, Indonesia.

Japanese elevators like Mitsubushi do not use the 9th floor because the Japanese number 9 being sounded like Chinese character KU, which means "cry".

Number 13 is regarded as an unlucky number in many cultures. Unreasoned fear of the number 13 is termed triskaidekaphobia. Due to this fear, some tall buildings have resorted to skipping the "thirteenth floor", either by numbering it "14" (though it's really still the thirteenth floor) or by designating the floor as "12A", or 12B and 14A or something similar.

Sometimes omitted in Latin Culture, mainly Spanish colonized ones. 17 is marked as the number of disgrace in these cultures, being even unluckier than 13. Some buildings mark them as 18, 77, 16A, or 18A.

Same reasons as 4. 49 is considered to be an especially unlucky number in Japan as it is evocative of the phrase "shinu made kurushimu", which means "to suffer until death".