Thyssen Aufzüge GmbH was the vertical transportation division of German steel manufacturer Thyssen AG which made elevators and escalators. The company merged with Krupp in 1999 and became ThyssenKrupp.

Thyssen was founded on September 29, 1891 by August Thyssen and his brother Joseph in Duisburg, Germany.

In the 1980s, Thyssen took over MAN's elevator division and later became Thyssen-MAN in 1984. At the same year they began entering the Spanish markets by acquiring Boettischer Elevadores, which became Thyssen Boettischer in 1985. Thyssen joined with several elevator companies such as Otis, Schindler, Kone, Mitsubishi, Hitachi, Johns & Waygood (later Johns Perry Lifts and then Boral Elevators) and Toshiba.

In 1995, Thyssen announced that it would merge with Krupp, and both companies eventually merged in 1999. The merger was completed in 2001, become ThyssenKrupp. At the same year, Thyssen renamed their U.S. elevator and escalator division Dover Elevators from Thyssen Dover to the new ThyssenKrupp name.

The blue version of Thyssen logo.

Thyssen logo on a Thyssen escalator.

Thyssen logo etched on the call button panel of a Thyssen elevator in Germany.

Thyssen logo with Boral logo. This is a Boral/Thyssen moving walks in Sydney, Australia.

Thyssen elevator with ThyssenKrupp logo. This elevator was installed during the period when Thyssen merged with Krupp.

Thyssen Dover name, only found in the United States. 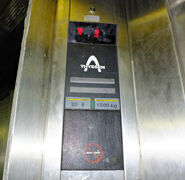 Thyssen elevator panel in La Serena, Chile, which is based on the original design from Elevadores Sûr in Brazil.

Hanyang Thyssen name in South Korea.
Add a photo to this gallery

The sign of the Thyssen escalators with Marryat & Scott names on the signs (currently maintained by Kone).

Thyssen elevator and escalator advertisement in Indonesia, from the 1990 edition of Yellow Pages Indonesia.
Add a photo to this gallery

Retrieved from "https://elevation.fandom.com/wiki/Thyssen?oldid=68455"
Community content is available under CC-BY-SA unless otherwise noted.