For the South Korea markets of the Sigma products, please refer to LG-OTIS.

Complete elevators, escalators and moving walkways, including their related components

Sigma was established in 2000, a year after Otis merged with LG Industrial Systems's elevator division and became LG-OTIS. It was established as a brand of Otis Korea for overseas markets.

In 2014, Sigma had a partnership with EXPRESS Elevator Co., Ltd., an elevator company based in Suzhou, China as well as a subsidiary of Otis[1]. In 2016, Express/Sigma opened their headquarters in Suzhou, China[2].

As of now, Sigma has operations in over 60 countries which are all represented by local distributors and sole agents. It also has subsidiaries located in Singapore, Malaysia, Thailand and Hong Kong (China, currently subsidiary of Otis Hong Kong).

The headquarters is located on the eight floor of Two IFC in Seoul, South Korea. Its factories are in China, one located in Hangzhou and another one located in the Tianjin Economic-Technological Development Area (TEDA) in Tianjin. It also has another factory in Dalian (operated by Dalian Sigma Elevator Company) which was opened in 1997 to meed demands on the Chinese elevator market. It is unknown if the Dalian factory is still operating.

Until 2013, production was mainly done in their Changwon factory in South Korea, which had been operating when GoldStar was still in business. In 2013, the factory was closed after it was sold to LG Electronics, and production was moved to China. This was also the same case for Otis Elevator Korea, where elevators installed in South Korea were manufactured in China. In 2017, Otis Korea announced that it would build a new research & development center and a manufacturing facility in Songdo International City in Incheon, South Korea, which construction started in 2018 and was completed in 2019[3][4][5][6]. With local production for Otis Korea has resumed in this new facility, it is likely that Sigma would resume its local production there.

Sigma logo with the "Otis Elevator Korea" name below.

Sigma sticker about not to open the doors by force pasted on the elevator doors' protection wrap. 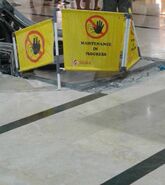