An overspeed governor is an elevator device which acts as a stopping mechanism in case the elevator runs beyond its rated speed. This device must be installed in traction elevators and roped hydraulic elevators. This device was first patented by Warner Elevator Mfg Company (Patent no.: US1549736[1]) and then Otis (Patent no.: US3327811[2]).

Typical governor designs include a sheave coupled to a rope attached to the elevator car. The sheave moves in response to rope movement in tandem with the movement of the elevator car. The sheave drives a shaft or spindle coupled to an actuation mechanism. The actuation mechanism may be a set of flyballs or flyweights adapted to extend radially when a predetermined level of centrifugal force is applied to them. Radial extension of the flyballs or flyweights causes them to contact an overspeed switch. When the overspeed switch is actuated, the power to the motor and motor brake is cut, thereby causing the motor brake to apply a braking force on the motor shaft. If the elevator car continues to increase in speed, a tripping assembly is triggered by the flyweights. The tripping assembly actuates a mechanism to stop the governor rope. Braking of the governor rope causes the safeties to be engaged and thereby stop the car.

Because the overspeed switch remains open until it is manually re-set, the elevator machine and brake power are not restored and the elevator system remains inoperable. In conventional elevator systems having machine rooms the switch to be re-set is conveniently accessible in the machine room by a technician. Typically, the governor is located in an overhead machine room.

In more recently developed "machine room-less" elevator systems, where the conventional machine room is eliminated, the governor and various other components are located in the hoistway. With the governor in the hoistway, the task of accessing and resetting a governor overspeed switch is time-consuming, complicated, and costly. Although a solution may be to provide a special door or hatch to access a governor in a hoistway, such a solution adds cost and space requirements. However, some MRLs may instead provide a switch in the cabinet to reset the governor automatically.

It is an object of the present invention to provide an overspeed switching system that operates safely and reliably while reducing the time and cost of restoring an elevator to operation after the overspeed switch has been tripped.

The present invention is directed to an overspeed switch system for an elevator where a first switch located in the governor is tripped in response to detected overspeed, and the tripping of the first switch causes a second, remotely located switch to be tripped, whereby when either or both switches are open, power to the elevator system is shut down. The first switch is provided with automatic re-set means, while the second switch is manually re-set in an easily accessible, remote location such as a control panel in a landing.

The system includes a governor that is responsive to elevator car speed through conventional coupling means such as a governor sheave coupled to a rope that is attached to an elevator car, whereby the rope transmits elevator car speed to the governor. When a predetermined speed is exceeded conventional actuation means, such as centrifugal flyweights, trigger a first set of switches and, if the car speed continues to increase, cause actuation of conventional mechanical means to impede elevator car movement. The first set of switches  may comprise one switch or any other number of switches, depending on various factors such as the degree of safety redundancy desired or the number of different components dependent upon overspeed conditions. For example, a "safety chain" electrically linking various components and associated switches may be implemented, whereby the opening of one switch renders the system inoperable. The first switch  of the first set, for example, may be for the purpose of tripping the remote overspeed switch while the second switch  of the first set may be directly in the safety chain.

The tripping of the first set of switches  causes them to open and, as a result, the power to the elevator machine and brake is cut, and mechanical braking means in the elevator machine impede elevator car movement. It is preferable that the first switch set comprises two monostable contacts located in the governor. The monostable contacts are configured to maintain contact, in a closed position, during normal operation. Implementing them in this way, as opposed to setting them in an open position during normal operation, reduces the possibility of a malfunction in overspeed mode due to, for example, corrosion or contaminant build-up on exposed contacts.

Power to trip the second set of switches  can be supplied from a main controller  during normal operation, and from the brake power supply during rescue operations.

If desired, a software-based switch may be implemented that is triggered by the overspaced switch on the governor and remains latched until a service technician resets them. 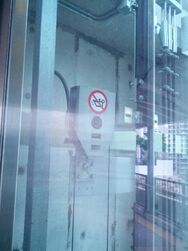 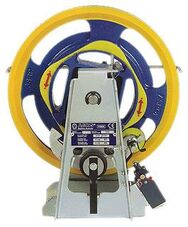 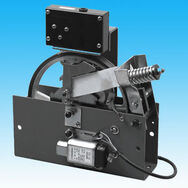 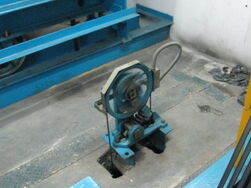 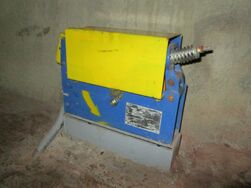 LG-OTIS overspeed governor installed in the early 2000s. This type of governor was later reused by Sigma. 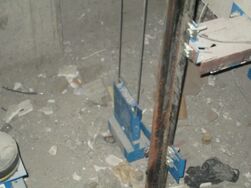 Otis Gen2 elevator governor tensioning pulley, installed on the elevator pit and attached to the guiderail. 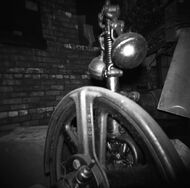 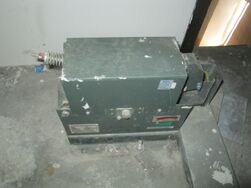 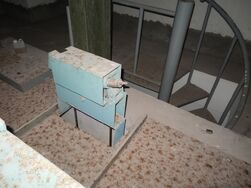