Complete elevators, escalators and moving walkways. including those related components

Otis Elevator Company is the world's largest manufacturer of vertical transportation solutions, especially elevators (which Otis invented in most recently known form) and escalators. The company was founded in 1854 in Yonkers, New York, USA by Elisha Otis, who invented the safety mechanism of the elevator should the hoisting rope break. This was created due to an accident with a freight lift at a local factory that injured the people using it [1].

From 1976 to 2020, Otis was a subsidiary of United Technologies Corporation. It was spun off on April 3, 2020. They have an elevator test tower in Bristol, CT which is about 28 floors. They also do tours of the test tower. They primarily test free-falls on their new, and old elevators. They also have some European Otis Gen2s there.

Otis was founded by Elisha Otis in New York, NY, USA, after he demonstrated the special safety elevator mechanism in the Crystal Palace Exhibition in New York City in 1853.

By the end of 1856, Otis had sold more than 40 elevators, all freight models. In 1857, the world's first passenger elevator was installed at E. V. Haughwuot & Company in New York, NY.

In 1868, Otis developed a steam-powered passenger elevator and in 1870, the company introduce a water-pressured hydraulic elevator.

In 1875, Otis invented the elevator governor.

In the 1880s, Otis has established branch offices in London and Paris, and had installed elevators in the Eiffel Tower, London Underground, Glasgow Harbour Tunnel, etc.

In 1889, Otis installed the first 2 elevators of the first sucessful electric elevator model at the Demarest Building in New York, NY.

Otis invented the automatic elevator in 1894 and was installed in the residence of Mrs. E. I. Shepard. It was the first recorded automatic (operatorless) elevator with push buttons.

Otis developed the escalator technology in 1895 and was introduced it in the Paris Exposition in 1900, a step type escalator. After that, the same escalator was installed in a department store in Pittsburgh, PA (Possibly Kaufmann's).

Otis also made another type of escalator, called the cleat type escalator. This type was probably not popular, and was made for only maybe 20 years.

Otis invented the gearless traction elevator in 1903. The first commercial installation was at the Beaver Building in New York City, NY.

Otis invented the geared traction elevator in 1908. The cable wrapped around the motor multiple times.

Otis invented the modern style geared traction elevator in 1911. Now, the cable only goes over the motor. This technology is still used today. Also in the same year, Otis installed their first elevator in Germany.

In 1915, Otis invented the self-leveling elevator, which they called the Micro-Drive. This elevator provides accurate stops at floor landings for the comfort of passengers. It was first used for the U.S. Army Bases during wartimes.

In 1924, Otis introduced a high speed semi-automatic elevator, called SignalControl. This elevator could make accurate automatic stops from twice the speed possible with manual operation. It was first installed in the Standard Oil Building in New York City, NY. In the same year, Otis made their first modern style automatic door.

In 1931, a double-deck elevator was introduced by Otis. The first one was installed in the Empire State Building in New York, NY.

In 1948, Otis introduced a high speed fully automatic elevator, called AUTOTRONIC Elevatoring. Now, elevator operators on new/refurbished elevators were almost obsolete, and the elevator cars are operated automatically and electronically as a coordinated group. The first installation of this elevator was completed at the Atlantic Refining Company Building in Dallas, TX in 1950, which has since been demolished.

On July 7, 1976, after a hostile takeover, Otis became a wholly owned subsidiary of United Technologies Corp.

In 1979, Otis introduced the Otis Elevonic 101, a fully microprocessor based elevator system for high-rise buildings.

In 1981, Otis introduced the Otis Elevonic 401 elevator, which was equipped with synthesized automated speech, information display and security features. It used fixtures from Otis's Series 1.

In 1983, Otis introduced a computerized dispatching service called OTISLINE. This service runs 24 hours a day and designed for Otis elevator mechanics. Initially, the service was only available in North America but it was later introduced in France in 1984 and China in 2000.

In 1988, Otis introduced Remote Elevator Monitoring (REM), which is a diagnostic system for checking and monitoring elevator performance from distant locations. In 1995, the system was expanded to 8 of 18 countries by introducing REM III.

In 1982, Otis purchased Evans Lifts of Leicester, and in 1997, the UK's oldest elevator (lift) company Express Lift Co. Ltd. of Northampton. Shortly after the purchase of Express, both companies merged together to form "Express Evans", which was owned by Otis.

In 2000, Otis introduced its machine-roomless elevator product, Gen2, which replaces conventional steel cables with flat polyurethane coated steel belts. It also features a smaller, energy-efficient gearless machine. The Gen2 elevator was introduced to the North American and Japanese market in 2003.

In 2013, Otis launched a new residential Gen2 Switch elevator that eliminates the need for three phase power, is solar-power capable, and uses battery technology to continue to run when the power goes out.[3]

Since Otis's spun-off from United Technologies, Otis Elevator Company is a trading company behind Otis, and publicly-traded owner is named Otis Worldwide Corporation[6]. It is traded on the New York Stock Exchange with ticker OTIS.

Otis has its headquarters in Farmington, Connecticut, USA and has major manufacturing facilities in America, Europe, and Asia. They have ten research centers globally, and eight area headquarters located in:

Gen2 is Otis' current flagship machine roomless elevator model sold worldwide since 2000. In certain countries, it is also available as a regular elevator model with a machine room, as well as a modernization variant for old elevators called Gen2 Mod.

OH 5000 is Otis's current low to high-rise elevator model primarily sold in Asia. It was originally a product a Xizi Otis. Another machine-room-less variant of OH5000 is called OH5000-MRL.[7]

Arise is a low to mid rise elevator model only sold in Asia. It is manufactured in China.

Genesis is a low-cost machine room less elevator model designed for low rise residential and commercial buildings in Europe. It is based on the Otis Gen2 platform.

SkyBuild[8] is Otis's self-climbing elevator system used during construction where the elevator climbs one floor at a time as the building rises. Each jumps can be accomplished between shifts, thus reducing impact on other trades. Once the building is completed, the permanent elevator is put into service as Otis SkyRise. This system is very similar to Kone JumpLift.

FOVF is a freight elevator model only sold in Asia. Originally a product of Xizi Otis, the elevator is designed for industrial buildings, factories, warehouses and also shopping centers.

Spec Eco is a MRL water hydraulic elevator made by Japan Otis from 2001.

Collective Control was the world's first automatic relay logic controlled elevator system from around 1924. This system had automatic doors, and most likely 5 speeds. This system did not support very high speed applications.

Otis Autotronic (automatic electronic) was an automatic programmed elevator system introduced in 1948. Unlike the earlier push-button models (Signal Control), these elevators were fast, and could change speeds and adjust their schedules to suit traffic demands, as well has having the ability to bypass hall calls when the car is fully loaded.

Elevonic was a series of traction and hydraulic elevator models with microprocessor controls. The name "Elevonic" is a portmanteau between the words "Elevator Control" and Computer Electronic".

Otis Europa 2000 and Europa 2001 were a traction elevator model designed for low rise residential and commercial buildings in Europe. They were mainly sold in Europe, although very few Europa 2000 elevators were also installed in Asia. These models are believed to have been succeeded by the Otis 2000 (see below).

Otis 2000 was a series of standardized elevator models primarily designed for the European markets, although it was also available in the Asia Pacific region. It was launched in 1993.

Note: Some of Otis's moving walk models are known as Trav-O-Lator.

Remote Elevator Monitoring (REM) is a diagnostic system for checking elevator performance from a distant location. It was introduced in 1986 for North America, expanded to France in the late 1980s and subsequently to other countries.

Otis logo with the United Technologies Company (UTC) logo. This logo is still used today (normally found in some US Otis elevator brochures).

New Otis logo normally found in the United States (such as on Series 5 and 6 fixtures) (2010 - present). 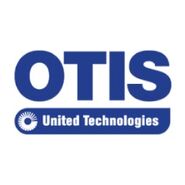 1890s? Otis nameplate mounted on outside of elevator car.

Otis elevator nameplate normally found in the 3200 elevators in Asia. 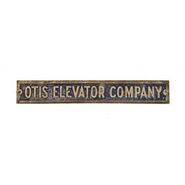 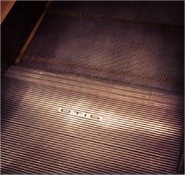 The Bristol Testing Tower in Connecticut.

The former head office of Otis elevator in Jakarta, Indonesia (PT. Citas Otis Elevator). It has moved to another building since January 9, 2017.

An Otis Gen2 elevator is being repaired in Jakarta, Indonesia.