Machine room less elevators (usually shortened to as M.R.L. or MRL) are a type of either traction or hydraulic elevator which do not require a machine room for the elevator.

Machine room less elevators do not have a fixed machine room on the top of the hoistway, instead the traction hoisting machine is installed either on the top side wall of the hoistway or on the bottom of the hoistway. The motor is installed using a permanent magnet which "sticks" the motor permanently and work with Variable Voltage Variable Frequency (VVVF) drive. Some of the hoisting machines are using gearless synchronous motors instead conventional induction motors. This design eliminates the need of a fixed machine room and thus saves much building's space. Almost all the traction MRL elevators are gearless traction.

Most machine room less elevators are used for low to mid rise buildings. Machine room less elevators in mid-rise buildings usually serves up to 20 floors. The industry standard maximum speed for an MRL traction elevator is 500 feet per minute (2.54 meters per second), however, there are specific models sold overseas which can reach 600 to 800 feet per minute (~4 meters per second), most notably a heavy-duty variant of the Kone EcoDisc MRL where the motor is in the center, not on the side. Some models can travel in excess of 30 floors. The Schindler 5500 in some parts of the world can travel up to around 50 floors.

There is a very rare design in which the traction machine is positioned under the elevator cab. An example of this design was used on the SchindlerMobile elevators introduced by Schindler in the late 1990s.

The controller of MRL traction and hydraulic elevators are usually located on a wall near the elevator. It can be on the bottom or top floor.

MRL hydraulic elevators have their machinery installed on the elevator pit. This is a Bucher Hydraulics "Tiger" MRL hydraulic pump. (Photo by Beno)

In 1996, Kone launched the world's first MRL elevator system "Kone MonoSpace" along with its signature hoisting machine "EcoDisc". The EcoDisc machine is shaped like a big green round disk. Soon, many rival companies began to make their own MRL products due to the popularity of Kone's MonoSpace elevator.

Toshiba (under strategic alliance with Kone) marketed their first MRL products in 1998 called SPACEL (another product was called Order SPACEL) which is based on the Kone MonoSpace elevator system. In 1999, Mitsubishi launched their bottom drive MRL elevator called "GPQ", in which the hosting motor is located on the elevator pit.[1] Nowadays they make Elenessa, NEXIEZ-MRL and DiamondTrac (for United States only), which the hosting motor location is adjustable in the shaft.

Otis launched their first MRL elevator product called Gen2 in 2000. Unlike other manufacturers, the Gen2 elevator uses flat steel rope belts instead of conventional steel ropes. In 2004, ThyssenKrupp introduced their first MRL elevators in the United States, named ISIS, which uses Kevlar belts. However, this product was discontinued after the Seattle children's hospital incident and was replaced by Synergy in 2008. In 2011, Otis launched their first hydraulic MRL system called HydroFit which is only sold in the U.S.

Benefits and detriments of MRL elevators

In 2006, one of the ThyssenKrupp ISIS elevators in Seattle's children hospital had its Kevlar ropes snap due to overheating. The elevator car fell from the 7th floor to the 3rd floor and came to a complete stop after the emergency brake engaged. No one was injured. The elevators were taken out of service a few days later for an inspection by the police.

At the top floor, usually there is a control panel to contain all the circuit board in one cabinet.

Machine Room Less elevator will make easier to meet the requirement for the disabled.

Another reminder to remind passengers that is a M.R.L. elevator with control panel location (Schindler). 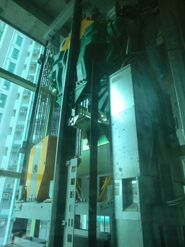 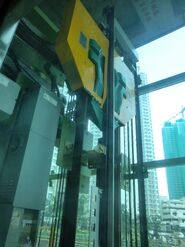 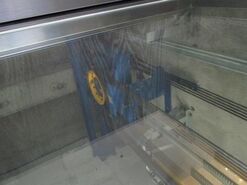 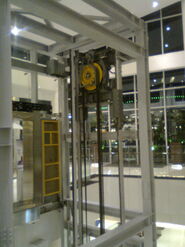 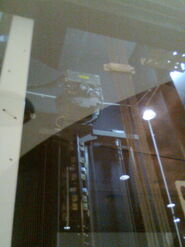 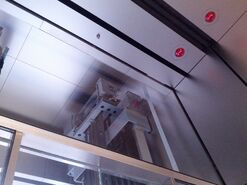 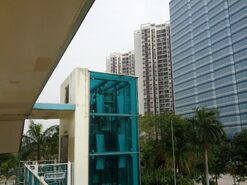 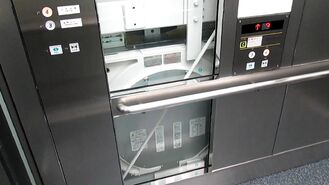 Mitsubishi Elepaq (or Elenessa) motor located on the elevator bottom pit in Tokyo, Japan. This one is a bottom-drive M.R.L. elevator. 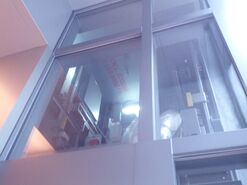 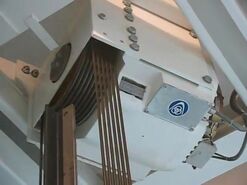