For fixtures found in the United States and Canada, Please refer to List of thyssenkrupp elevator fixtures (North America).

This is a list of some notable thyssenkrupp elevator fixtures that are found in different countries, excluding the United States and Canada.

After Thyssen merged with Krupp and became ThyssenKrupp, the company continued on making the following fixtures.

ThyssenKrupp continued making Thyssen's STEPMODUL buttons, which had been rebranded as STEP Basic. These are dark grey square push buttons made of plastic polycarbonate with a green lettering and a red LED illuminating dot.

This is a grey/silver colored square button with a chromed plastic and an illuminating halo which light up red (and sometimes blue) when pressed. An option for the button is a tactile, or both a tactile and braille marks.

A non-pressable STEP Classic button with the STEPMODUL name engraved.

This is a vandal resistant button with a silver concave button, engraved lettering and a red LED illuminating dot above the button. 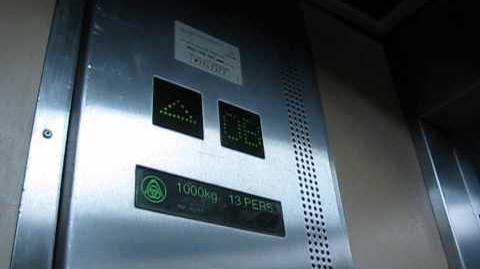 This is a square stainless steel button with illuminating halo made by Schaefer.

This is a round stainless steel button with an illuminating halo and engraved lettering.

ThyssenKrupp use either LED dot matrix display, segmented display, or a custom LCD display for the floor indicators. Hall lanterns, if present, are usually illuminating triangles. Some elevators may also have an external floor indicator combined with hall lanterns.

These fixtures are found and used in ThyssenKrupp elevators installed in Asia Pacific.

Not to be confused with Shanghai STEP Electric Corporation.

These buttons are based on the European STEPMODUL/STEP Classic buttons. Unlike the European version, the buttons have both illuminating numbers and halo. These buttons usually light up red when pressed, although some of them light up blue, orange or even green as an option, but this is very rare. Sometimes, Shanghai STEP PB28 buttons are also used on these fixtures, and due to their similarity with ThyssenKrupp's buttons, some elevator enthusiasts in Asia often mistaken these third-party buttons as ThyssenKrupp's buttons. These buttons are also known as STEP-C Ultrathin in the Asian market. 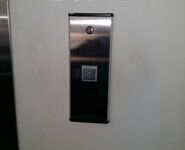 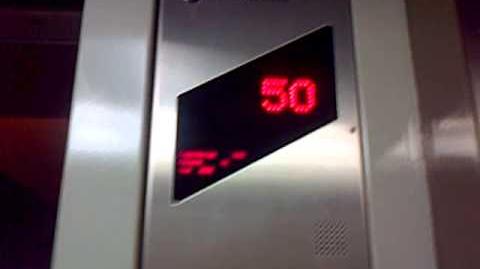 These fixtures are made by Schaefer and provided by ThyssenKrupp. They are square stainless steel buttons with both illuminating halo and number. Some buttons also have braille marks as an option, to make the elevators more accessible for disabled people. 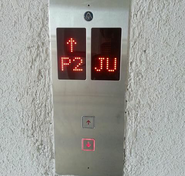 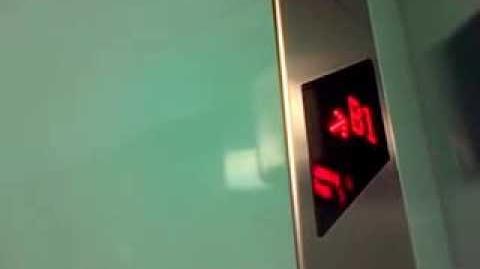 These are diamond-shaped buttons which resembles Hyundai's Type 40 buttons. They have both illuminating number/symbol and halo.

2016 ThyssenKrupp hall station with AN170 buttons.
Add a photo to this gallery

These are round buttons with both illuminating number/symbol and halo.

2016 thyssenkrupp BA21G buttons with red halo.
Add a photo to this gallery

These are large sized stainless steel square buttons that are flushed into the panel. They have illuminating halo and lettering.

2018 thyssenkrupp car station with BE 200 buttons.

thyssenkrupp BE 200 buttons for inspection control. Clockwise: Start Down, By Pass, and Start Up.
Add a photo to this gallery

These are round stainless steel buttons with illuminating halo and lettering.

ThyssenKrupp elevators in Asia Pacific use either LED dot matrix or LCD indicators. There are three variants of interior floor indicator displays. The first one, which is the earliest variant used from the early until late 2000s, is either a rectangular or parallelogram shaped display. The second, which was used from the late 2000s until the mid 2010s (probably 2013 or 2014), is either an octagon or rounded rectangle shaped display. The third, which is the latest variant used since 2014, is a rectangular display with either LED or blue LCD display.

2016 ThyssenKrupp hall station with LED indicator and AN170 buttons. (Simplex)

2016 ThyssenKrupp hall station with LED indicator and AN170 buttons. (Duplex)

2016 ThyssenKrupp hall station with LCD indicator and AN170 buttons. (Simplex)

2016 ThyssenKrupp hall station with LCD indicator and AN170 buttons. (Duplex) 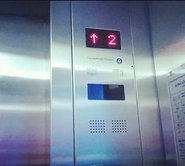 Another style of ThyssenKrupp LED floor indicator, which is rounded rectangular and has an orange LED.

Another style of ThyssenKrupp LED floor indicator, which is square

Focus fixtures are made by ThyssenKrupp Elevator France and were widely used in France and United Kingdom. They were used in ThyssenKrupp Univers MRL elevators. Introduced sometime in the early 2000s, these fixtures have stainless steel buttons with either yellow or blue illuminating lamp on the top left corner of the button, and emits a beep when pressed. The main floor button inside have large green star pressel and a green lamp. Button arrangement can be a conventional or rarely, keypad style layout. Floor indicators use monochrome display; an option was a blue LCD display. Focus fixtures complies with EN 81-70. 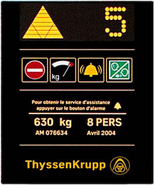 An illustration of Focus monochrome display.

The fixtures used in the older model of Thyssenkrupp Synergy MRL elevators in Europe consist of blue illuminating STEP Classic buttons and blue LCD floor indicators with segmented numbers. Sometimes, a blue LED dot matrix display is also used but this is normally for the landing fixtures[1].

These are the fixtures used in ThyssenKrupp synergy blue and EVOLUTION BLUE elevators. They were introduced sometime in the 2010s. The design of the landing and car stations can be curved or just straight.

These are round silver polished buttons with a blue illuminating halo and tactile legend.

Closer look of the Blueton buttons on a ThyssenKrupp synergy BLUE elevator (Credit: Beno)
Add a photo to this gallery

These buttons are identical to the STEP Classic buttons used in the older Synergy elevators. These buttons appears to be exclusive to EVOLUTION BLUE[2].

ThyssenKrupp synergyBLUE and EVOLUTION BLUE can use either Schaefer's MT 42, RT 42 or VB 42 series buttons.

These fixtures are found in the United Kingdom which consists of round buttons with tactile and illuminating halo, and floor indicator with LED dot matrix display.

ThyssenKrupp UK floor indicator.
Add a photo to this gallery

These fixtures are found in Spain and Mexico. It is unknown if they are found in any other countries. The buttons are square-ish, with a braille above for horizontal or to the side for vertical, on either a normal vertical panel for car stations or a horizontal panel for car stations. Sometimes, STEP Classic or CEHAM Series SQ vandal resistant (optional) buttons are also used in these fixtures.[3][4] Floor indicator is LCD, with either a segmented number or an "antique" dial indicator style display. These fixtures are used in Spanish ThyssenKrupp Synergy MRL elevators.

These are the fixtures which are and have been made by thyssenkrupp Elevadores Brazil in Brazil. They are mainly used in Central and South America.

Top Line (also known as Frequence Dyne or Discovery) is a fixture line that was first developed by defunct Brazilian elevator company Elevadores Sûr in the 1990s, before Thyssen acquired it. After the buyout, Thyssen brought over the production of these fixtures before they were rebranded as ThyssenKrupp. This fixture line has round stainless steel buttons with blue illuminating halo. Floor indicators are either LED dot-matrix or LCD display.[5] Top Line fixture is divided into two series; Inox (hall/call stations) and St Steel (car operating panels). One very unique feature is the weight indicator that lights up as more weight is in the car, just below the speaker portion. Some options are the capacitive/touch sensitive buttons for car stations and a 7-segment display; the latter one one being remarkably similar to Schindler's HT fixtures used on the Schindler 400A elevators in North America. Top Line fixtures might have been discontinued. 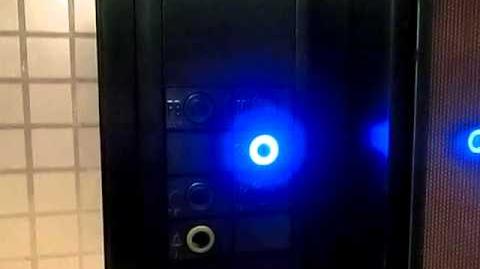 This is an older Brazilian ThyssenKrupp fixtures lineup which has a similar appearance with Top Line, and most likely originated from Elevadores Sûr. It has small, black plastic buttons and grey number and braille plates[6]. The floor indicator is the same type as Top Line, featuring a 7-segment display.[7] These fixtures have been discontinued.

High Protection is a vandal resistant fixture line. It has lozenge shaped button plate which contains a grey braille plate on the left and a silver round concave button on the right with a small illuminating lamp on the top left. Floor indicators are either LED dot-matrix or LCD screen.[8] 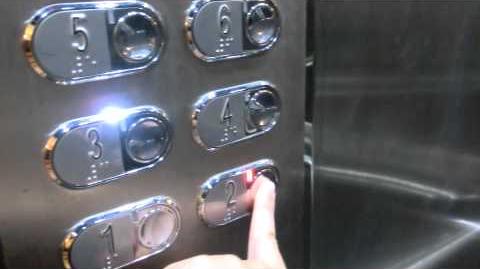 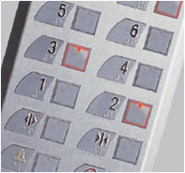 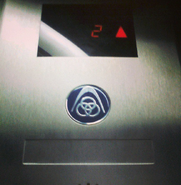 Light Press shares the same appearance with Soft Press, except that the buttons are Schaefer MT 42.[10]

The fixtures used in the Destination Selection Control (destination dispatch) are mostly LCD touchscreen. Sometimes a special wheelchair button is provided next to the screen to activate handicap mode. There is also a conventional keypad with Schaefer MT 42 buttons and a small LCD display. 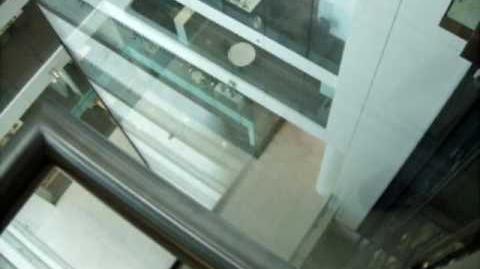 Like Everbright, sometimes in Australia ThyssenKrupp uses buttons that look remarkably similar to Dewhurst. However, the symbols are often different.

ThyssenKrupp elevators in United Kingdom and Hong Kong often uses buttons made by Dewhurst or sometimes Switching Components (Dewhurst's subsidiary). Also as the mention above, Schaefer MT 42 buttons can be provided for some installation, often for STEP Module fixtures, the new synergyBLUE and EVOLUTION BLUE elevators in Europe as an option. The Schaefer BudgetLine fixtures package can also be used for modernizations in Germany and some Scandinavian countries (example: Norway). In Asia, there are also ThyssenKrupp elevators using fixtures made by STEP, and they even provide a counterpart version of their STEP Module, the Shanghai STEP EB210 push buttons series.

In the 2000s, some ThyssenKrupp elevators in Hong Kong's Public Housing Estate blocks and Home Ownership Scheme blocks are still using Dewhurst fixtures. All of them are US90-15 buttons and UL16 floor indicators (floor indicator standard continued until early-2010s, floor indicator were provided by their own company). Sometimes, they may use Everbright buttons. 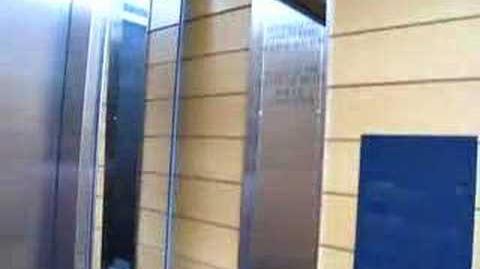 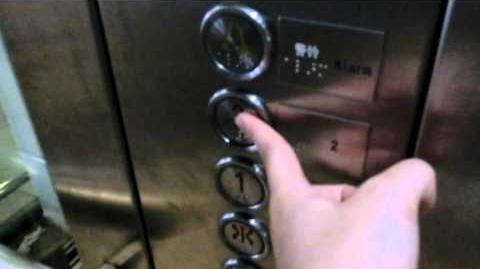 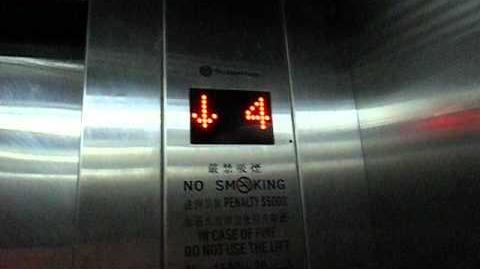 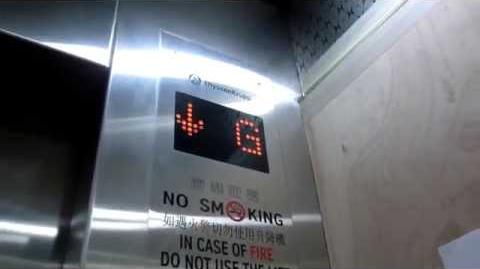 Unknown STEP series buttons on a ThyssenKrupp elevator.
Add a photo to this gallery

Typical installations on ThyssenKrupp elevator in a Public Housing Estate in Hong Kong.

ThyssenKrupp elevator installed in 2014 Goverment Clinic were using large LED floor indicator were provided by their own company.

ThyssenKrupp elevator installed in 2018 Public Housing Estate were using large LED floor indicator were provided by their own company. 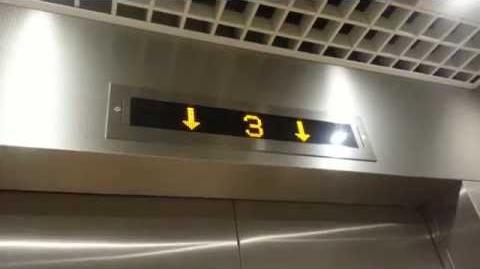 Retrieved from "https://elevation.fandom.com/wiki/List_of_thyssenkrupp_elevator_fixtures?oldid=65451"
Community content is available under CC-BY-SA unless otherwise noted.