This is a list of elevator fixtures that have been used/made by Thyssen.

These fixtures consists of illuminating round glass buttons, and analog floor counter with illuminating numbers. They are based on the fixtures used by Stahl and Rheinstahl.

1970s Thyssen inside floor counter.
Add a photo to this gallery

The fixtures used in early 1980s Thyssen elevators were round illuminating plastic buttons, and analog floor indicator with lamps arranged vertically. The hall call button panel looks the same as the 1970s type. These fixtures might have been made by Schaefer. They are based on the fixtures used by Stahl and Rheinstahl. 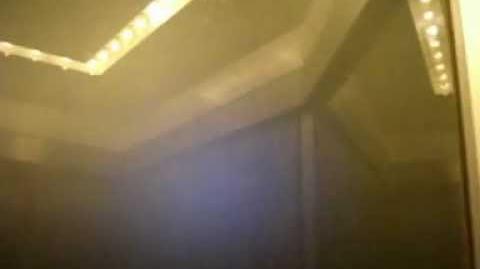 These are round metal buttons with red illuminating halo. Usually the floor numbers are not indicated on the buttons, instead they are engraved on the car station just next to the buttons.

Thyssen Type 44 buttons with amber halo lamp.
Add a photo to this gallery

1980s Thyssen hall lanterns and floor indicator, with the numbers changed from red to green (Credit to YouTube user TG97Elevators)

Thyssen made various types of buttons in the 1990s, of which most of them were given names, while some others have their names not officially known. However, Thyssen also used fixtures made by non-proprietary companies such as Schaefer and sometimes Dewhurst.

A lot of Thyssen elevators in the 1990s used the STEPMODUL series buttons. These are black square buttons made of plastic polycarbonate with green numbers/symbol and a red dot lamp on the top of the buttons. ThyssenKrupp continued on making the STEPMODUL buttons as the STEP Basic series after the merger in 2001. However, they were later discontinued. 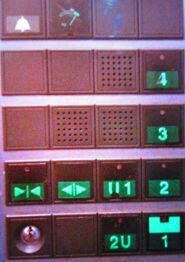 STEPMODUL nameplate.
Add a photo to this gallery

STEP Classic are square push buttons made of aluminium with a red illuminating halo. They look similar to the STEPMODUL buttons except that they were made of different material and with different colour. Today, ThyssenKrupp still makes these buttons as the STEP Module/Module Classic series in Asia and STEPMODUL series in Europe. 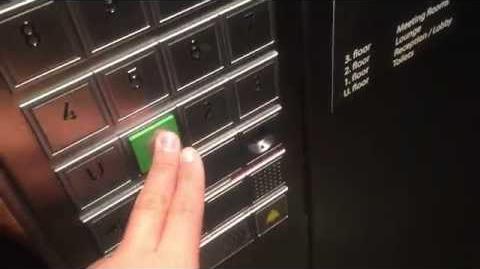 Nice Thyssen lifts at Rica Forum Stavanger
STEP Classic (European version) The main floor button is in green instead of metal. (video: 123Truls123)
Add a photo to this gallery

STEP Solid is a series of vandal resistant-style buttons. They are stainless steel buttons with small concave button, engraved legend and a small red dot lamp on the top. Like the STEPMODUL, ThyssenKrupp continued on making the STEP Solid buttons for a short period after the merger. 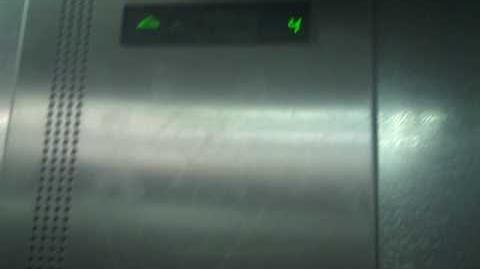 MT 42 was a push button made by Schaefer, a German company specializes in elevator fixtures. The buttons are square made of stainless steel, with an illuminating halo (usually red) and engraved legend. These buttons are usually found in some late models of Thyssen elevators. After the merger, Schaefer's MT 42 buttons were continued to be used by ThyssenKrupp as optional fixtures, often used in modernizations in several European companies like Germany, Denmark, Sweden and others. As of today, MT 42 are still offered as optional fixtures for new ThyssenKrupp elevators.

Car station with MT 42 buttons.
Add a photo to this gallery

These are round and stainless steel with either red or amber illuminating halo. 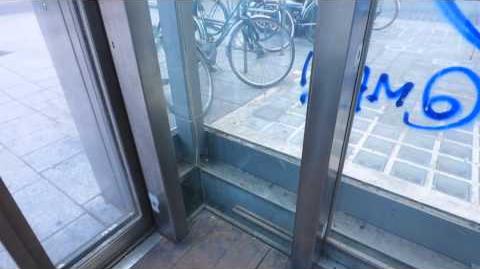 These fixtures were originally used by Cenia, a defunct Spanish elevator company that have been bought by Thyssen. They were used in Thyssen-branded Cenia elevators in Spain and other countries. The buttons are square stainless steel with rounded corners, engraved legend and a small red dot lamp on the left side of the buttons. They were made by Mecanismos y Accesorios (MAC, predecessor of MP Lifts) and are known as B12 series[1][2]. Floor indicators use LED dot matrix display.

Located at the Broadway centre in Beirut, Lebanon.

Located at the Broadway centre in Beirut, Lebanon.

Located at the Broadway centre in Beirut, Lebanon
Add a photo to this gallery

There are several push buttons used in Spanish Thyssen elevators in Spain and other countries, they are:

These are white square buttons with a concave surface with a black frame and numbering plate beside them where a small red illuminating dot is located. These buttons appears to be only found in Spain, and were used in Thyssen Boetticher branded elevators in the 1990s and possibly late 1980s. The buttons might have been originated from Boetticher (a Spanish elevator manufacturer) and reused by Thyssen after the merger, though this is unconfirmed. Floor indicators are usually simple 7 segments display. These buttons are known as PM-1 according to elevator parts supplier websites[3].

Thyssen's PM-4 buttons look a bit similar to the North American ThyssenKrupp Signa4 buttons, but have a second halo in the shape of a rounded square that does not light up. They were made by Ceham, a Spanish company which specializes in elevator fixtures. The button's halo light up either red or blue. The call button plates are just like a regular rectangle call plate but are rounded on the corners. In addition, the braille and tactile markings are removable from the button plates[4]. These fixtures are mainly found in Spain, certain South American countries and possibly Portugal. 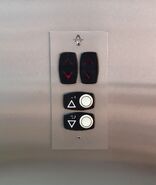 2001 Thyssen car station in Lanzarote, Spain with PM-3 buttons. Note the "Thyssen" button on the button which doesn't actually do anything when you press it under normal circumstances. 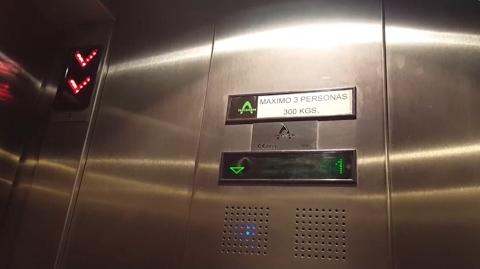 Another button that Thyssen made in the 1990s, was the PM-5 series button[5]. It is a linear push button, with the exception of the call button, which is tactile. They are square stainless steel buttons with a red illuminating strip on the top and a metal button plate next to them. The name of these buttons is unknown, and appears to be only found in Spain and American Latin countries. Further the emergency call button is a gray button with rounded corners, a small lamp and small red dot.

Thyssen car operating panel with PM-5 buttons.
Add a photo to this gallery

This was another type of push buttons Thyssen used in the 1990s. They were grey square buttons with rounded corners, braille marks, tactile and a small red dot lamp next to the buttons. The name of these buttons is unknown, but it is suspected that they might have been made by Ceham, a Spanish manufacturer of elevator fixtures. These buttons are only found in Spain, Portugal and certain South American countries.

Unknown Spanish button used in a Thyssen elevator in the Lisbon Metro in Portugal. 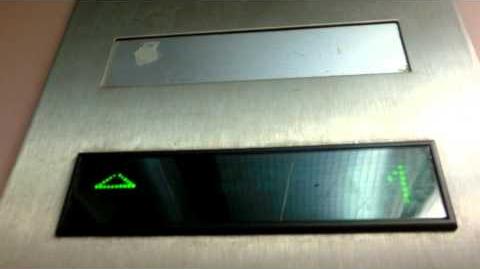 These are rectangle shaped floor indicators on the car stations with either a green LED digital segments or dot-matrix display. There was also an analogue display version, with printed numbers and red dot lamps on the display[6]. The hall lanterns are black squares with green LED triangle shaped arrows, often comes with a floor indicator. Some elevators also have Thyssen's 1980s white triangle hall lanterns. There was also in-car lanterns with red LED dot matrix display which are only found in Thyssen elevators installed in Spain and certain Latin American countries. 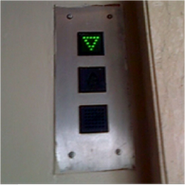 Some late model Thyssen elevators installed in the early 2000s in Spain use blue LCD floor indicators with a white segmented character. These indicators are usually used along with the PM-4 series buttons. After the Thyssen name was discontinued, ThyssenKrupp reused these indicators to be used on their Spanish elevators with Millenium series cab interior.

Thyssen often use digital segmented floor indicators on some elevators from the late 1990s to 2000, usually when Schaefer's MT 42 series buttons are used. A lot of 1990s and early 2000s Thyssen elevators in Hong Kong, China use 16-segments display which look very similar to Toshiba.

A few Thyssen elevators in Canada use U.S. Soft-Touch fixtures. It is unknown if any of them use the U.S. vandal resistant fixtures.

Top Line (also known as "Frequencedyne" and sometimes "Discovery") was a fixtures line first developed by a defunct Brazilian elevator company Elevadores Sûr in the 1990s. These fixtures consists of small, black plastic buttons with grey number/braille plates and digital segments floor indicator displays[7]. Thyssen continued on the production of these fixtures when they acquired the company in 1999. The design remained largely the same like it was except that the logo was changed from Elevadores Sûr to Thyssen. They were later re-produced by ThyssenKrupp during the 2000s for the Central and South American market.

Thyssen Top Line elevator panel from 2001 in La Serena, Chile.
Add a photo to this gallery

Besides their own fixtures, Thyssen also used fixtures made by third-party or non-proprietary elevator component companies. For example, some 1990s Thyssen elevators found in England and Hong Kong use Dewhurst buttons. There are also a few Thyssen elevators in the United States that uses Innovation Universal fixtures. 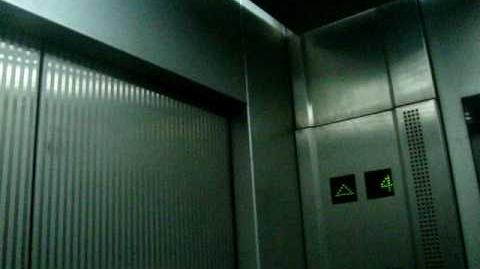 In South Korea, a lot of 1990s HANYANG-THYSSEN elevators have had their original black STEPMODUL buttons replaced with generic Korean buttons. These generic buttons are stainless steel with red illuminating number.

Retrieved from "https://elevation.fandom.com/wiki/List_of_Thyssen_elevator_fixtures?oldid=72089"
Community content is available under CC-BY-SA unless otherwise noted.