This is a list of elevator fixtures that have been made/used by Schlieren.

These are small round white plastic which lights up by bulb, and functions as car floor position indicator as there is no floor indicator inside the car, making it look very similar like Mitsubishi elevator fixtures in the 1960s. However, they do not lights up when they are pressed.

Some Schlieren elevators also have illuminating numbers next to the floor buttons which include floor indicator inside the car. 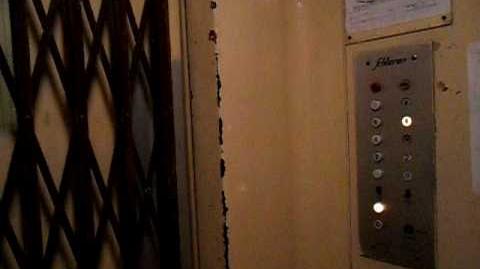 中環半山園林大樓Schlieren拉閘升降機-0
One of Schlieren elevator using Fiam Fixtures in Hong Kong (Video By: Vincent Chong)
Add a photo to this gallery

These analog hall floor indicators are normally like in 1960s Mitsubishi in Hong Kong. In the 1970s when Schlieren began using automatic doors, there is an analog floor counter with illuminating numbers shown over a black background display[1].

Costumed Horizontal floor indicator above doors at Hall Station.
Add a photo to this gallery

Most Schlieren elevators installed in the 1950s-1960s are using manual folding doors. In Hong Kong, most of them have scissor gate inside the car for safety reason.

Schlieren elevator in Hong Kong with scissor gate inside.
Add a photo to this gallery

Retrieved from "https://elevation.fandom.com/wiki/List_of_Schlieren_elevator_fixtures?oldid=76232"
Community content is available under CC-BY-SA unless otherwise noted.