This is a list of Salient elevator fixtures which are found in Australia. Note that the series of these fixtures are unconfirmed and are named based on their appearance. Salient fixtures were mostly used for modernizations done by various elevator companies (both major and third-party ones), but they were also used for new elevator installations.

Salient Pty. Ltd., the manufacturer of these fixtures, seems to have closed down permanently. It is unknown when exactly, or even if they are still in business, but their website has been taken offline in late 2014-early 2015.

These buttons are either white or black and have a grey halo that would light up in red, green or white. They come with either a flushed or (more commonly) protruded halo. 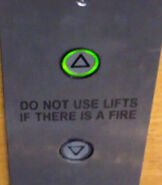 Salient round buttons with green halo.
Add a photo to this gallery

These buttons comes in white (and presumably black) and have a grey halo that would light up in red, orange, green or white similar to the round buttons. Like the round buttons, they come in either flushed or protruded halo.

Flushed square Salient call station in brass that features a grey halo that lights up amber. 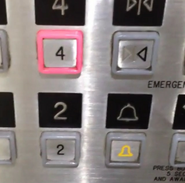 These buttons have metal plate with engraved symbol and number, and a red illuminating halo. 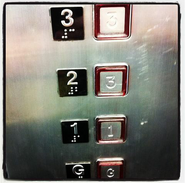 Salient makes few different types of red LED dot-matrix floor indicator with scrolling arrows and number. An interesting thing here is that at the same time the number scrolls, the arrow would stop scrolling until the new number appears. Salient indicators can display either red, orange or green, but red is the most common colour. 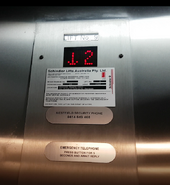