For fixtures found in Asia and Europe, please refer to List of Mitsubishi elevator fixtures.

This is a list of Mitsubishi Electric elevator fixtures which are only found in the United States.

These were dark brown-coloured square plastic buttons with a square orange-illuminating lamp in the middle and braille plate attached to them.

In some cases (possibly only on Mitsubishi elevators from the mid-late 1980s), the hall stations had an unusual design with a black stripe in the middle, and metal stripes on both sides. The call buttons, access key switch (if present), and directional indicators are on the black stripe. The directional indicator did not show when the elevator arrived, but showed what direction the elevator is traveling in.

Custom 1980s-1990s Mitsubishi square buttons. These were found in the Hotel Nikko in San Francisco.

Fire service panel and a "To Be Used In Case Of Fire Only" button (because of California code) on an American Mitsubishi elevator.

"To Be Used In Case Of Fire Only" button (because of California code) on an American Mitsubishi elevator.
Add a photo to this gallery

These were grey-coloured round buttons that protrudes from the panel. They have an orange illuminating number or symbol, but some buttons might also have a very small dot lamp which lights up white[1]. These buttons are commonly found in California.

The following fixtures below are currently used on the Mitsubishi DiamondTrac, GPM-III and hydraulic elevators in the United States.

These are grey coloured round buttons made of plastic with a yellow-illuminating lamp in the middle.

American Mitsubishi round stainless steel buttons with an orange strip lamp on the top.

American Mitsubishi round stainless steel buttons with an illuminating halo.
Add a photo to this gallery

American Mitsubishi LCD-based dot-matrix car floor indicator. This is the older version where the arrow is positioned next to the floor number. 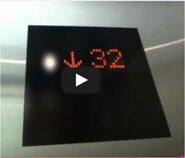 American Mitsubishi LCD-based dot-matrix car floor indicator. This is the newer version where the arrow is positioned above the floor number.
Add a photo to this gallery

The destination operating panel for DOAS destination dispatch is the same type as the one used in Asia and Europe, except that the keypad buttons are black and raised due to ADA (as well as Californian) compliant code.

Mitsubishi elevators in the United States rarely use fixtures made by non-proprietary elevator component companies. An example of this are one of the elevators installed in Westfield San Francisco Center, which uses Innovation fixtures[3].

Retrieved from "https://elevation.fandom.com/wiki/List_of_Mitsubishi_elevator_fixtures_(North_America)?oldid=63445"
Community content is available under CC-BY-SA unless otherwise noted.