This is a list of elevator fixtures made by Leadway Elevator Components from Taiwan.

Leadway's fixtures are mainly used by smaller elevator companies in Taiwan and other Asian countries like Singapore and Indonesia. They are also used in some Taiwan-made home elevators, such as E-Feng Machinery and Sakura Elevator.

This is a square button with rounded sides. Both the number and halo lights up when pressed. Leadway also makes a version of this button that comes with a non-illuminating tactile and braille, known as LY-02B. 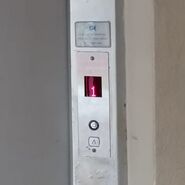 An old elevator modernized by Eletec Elevator in Singapore, with Leadway LY-02 buttons.

This is a black square button with either a black or grey frame. The number lights up when pressed.

This is a square button that has a silver frame, and both an illuminating halo and number. Like the LY-02 series, there is another version that comes with a non-illuminating tactile and braille, known as LY-04B.

This is a round stainless steel button with black lettering and an illuminating halo.

Leadway only makes one LCD display for floor indicators, the FDM-09 series. This is a LCD display with white characters over a blue background.

There are three types of operating panels that Leadway currently makes: