This is a list of different elevator fixtures that have been made and/or used in LG elevators.

After changing their name from GoldStar to LG (Lucky Goldstar), the company continued to make these fixtures under the LG name until the late 1990s. Buttons are black round with orange illuminating halo and symbol or number. In the LGP, MGP and HGP type elevators, the floor buttons will emit a beep sound when pressed.

There are two types of button panels that LG made. One is a dark grey colored surface mounted panel and the other one is just a basic stainless steel panel. For the surface mounted car stations, the floor indicator display is either slanted downward towards the floor (similar to an Otis Series 1 panel) or just flat. For the stainless steel panel, the floor indicator display is much smaller - these panels are usually found in bed or freight elevators[1][2]. All the indicators use red 16-segments display, along with two orange triangle arrows. 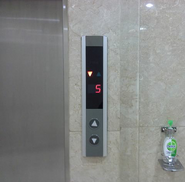 LG car station with the indicator has been retrofitted with generic LED dot matrix display. This was found in Ang Mo Kio, Singapore.

These fixtures use black square buttons with orange illuminating lamp. The floor indicator for is a long rectangular floor counter above the door with digital segments display. It is the same type as the one used by GoldStar in the 1980s.

These fixtures are usually found in luxurious places and high-rise elevators.

These are black square buttons with an illuminating halo and white frame. The door open and close buttons are white.

These buttons are similar to the black square ones above but the collar/frame is an illuminating halo.

LG also made a round version of the touch sensitive buttons which are usually made of stainless steel with an illuminating halo. There was also a black version. These touch buttons are normally used as call buttons although they could also be used inside the elevator as floor buttons but this is very rare.[3]

Like all the other fixtures, LG use red 16-segments digital display and two orange triangles for directional arrows.

Credit to YouTube user sumosoftinc.
Add a photo to this gallery

This indicator is usually found in high-rise elevators. It is a multicolored LED text bar which shows analog-style floor numbers and sometimes custom text. An example of this indicator can be found in the elevators at Baiyoke Sky Hotel in Bangkok, Thailand.

These fixtures are used in late models of L/M/H series elevators, as well as Di (Distributed Inverter) elevators shortly before LG's elevator division was sold to Otis in 1999 and became LG-OTIS. These fixtures uses stainless steel rounded rectangle buttons with illuminating halo and engraved lettering. The alarm button is rectangle. These buttons emit a beeping sound when pressed, and like all the other previous fixtures, the floor indicator uses red 16-segments display with two orange triangle arrows.

In some countries such as Singapore and Hong Kong, Dewhurst chassis are also provided as well as landlords request.[4]

1997 LG car station but the floor buttons have been replaced by Sigma in 2014.

The closer look of the LG square alarm button.
Add a photo to this gallery

Like its predecessor GoldStar, LG had a few types of hall/landing floor indicators. The most common and distinctive type is the one that has a slanted digital display in the middle along with two flat displays on the sides where the arrow would be shown. This indicator are found above the landing doors, and are either incorporated into the transom panel or just installed on the wall. There are also vertical hall floor indicators which are installed separately next to the landing doors. Some elevators also have the landing call stations combined with a floor indicator.

1997 LG hall station.
Add a photo to this gallery

LG had several different variants of hall lanterns, with almost all of them were originated from the GoldStar era. The most common ones are the round glass lanterns with or without a triangle arrow. Another style was the vertical bar lanterns, with the lanterns protrudes from the panel. All of these lanterns lights up green, red or orange.

LG hall lanterns which were reproduced from the GoldStar era.[5] 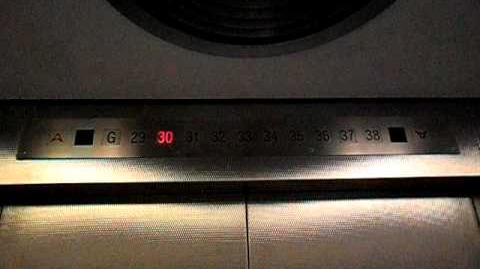 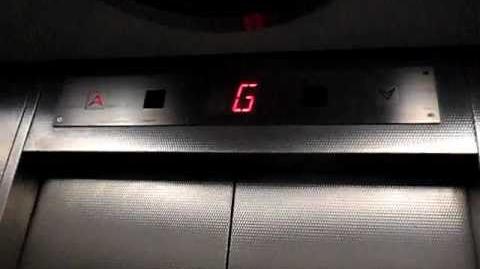 柴灣興華(一)邨停車場大廈Sigma(LG)升降機
Add a photo to this gallery

A few early LG elevators in public housing blocks built by the Housing and Development Board (HDB) in Singapore also used Dewhurst's Black US81 buttons, along with Dewhurst's ULS47H LED indicators.

LG elevator in a Singapore HDB public housing block with Black Dewhurst US81 buttons. Due to the elevator age and heavy usage, the black coating on the buttons have blown out.
Add a photo to this gallery

Almost every LG elevators installed in Singapore's HDB public housing blocks from the mid 1990s to early 2000s use generic buttons from South Korea, with the standard LG button beeper. It is unknown what company that made these buttons.

LG car station with unknown generic Korean buttons in a Singapore HDB block.
Add a photo to this gallery

These fixtures was introduced after Otis bought LG in 1999 and became LG-OTIS until 2005. They are pretty much the same as the ones used in very late models of 1990s LG elevators apart from a few changes; these includes newly updated buttons with braille marks and illuminating number or symbol added, and the segmented numbers on the indicators have been changed from red to orange. At the same time LG-OTIS also introduced a newer variant of button which is a convex square or round button with a lamp in the middle. The interior floor indicator is either on the car station or above the door.

After LG-OTIS Elevator Company changed name to Otis Elevator Korea (OEK) in 2005, OEK continued making these fixtures with further updates, such as making the buttons surface mounted and redesigning the floor indicator display. By the 2010s, these fixtures are no longer made by OEK in South Korea, but they are still being made by its subsidiary company Sigma for other countries. They are also used for modernization of older GoldStar and LG elevators.

In the United States, these fixtures have been modified by adding braille plates next to the buttons to make them ADA compliant. In addition, the American version have a different alarm button which was not made by LG. It is unknown which company that made it.

LG elevators in Singapore and Hong Kong often use generic fixtures like Dewhurst, normally using the US90-15 push buttons and vandal-resistant floor indicators (in Hong Kong only).

Retrieved from "https://elevation.fandom.com/wiki/List_of_LG_elevator_fixtures?oldid=73401"
Community content is available under CC-BY-SA unless otherwise noted.