This is a list of some Korean thyssenkrupp elevator fixtures found in South Korea as well as other countries in Asia, including those used in ThyssenKrupp Dongyang elevators.

These fixtures are used in ThyssenKrupp Dongyang branded elevators in South Korea as well as other Asian countries from late 2003 until 2008.

After Dong Yang was bought by ThyssenKrupp in 2003 and became ThyssenKrupp Dongyang, the company continued to make Dong Yang's black square buttons until around the mid or late 2000s. These buttons are basically a remake of the original 1990s Toshiba/Dong Yang buttons, but were modified by replacing the white halo into silver halo. 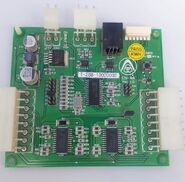 Type 44 buttons[1] were first made by Dong Yang in the early 2000s. They are oval shaped buttons made of stainless steel with a red illuminating halo. It also has a small red illuminating curve to the left of the number or symbol. ThyssenKrupp no longer made these buttons, but spare buttons are often available (either by ThyssenKrupp branches outside South Korea or third-party suppliers) for modernizations.

Early 2000's Dong Yang (but branded as ThyssenKrupp) car station with Type 44 buttons. This was installed by ThyssenKrupp as part of an elevator refurbishment.
Add a photo to this gallery

These are round stainless steel buttons with an illuminating halo that has been broken into two parts. These buttons have been discontinued.

ThyssenKrupp Dongyang Type 77 buttons.
Add a photo to this gallery

These are rounded rectangular buttons with a red illuminating halo and a raised black line below the number or symbol. Sometimes they may have braille marks as an option.

ThyssenKrupp Type 88 buttons.
Add a photo to this gallery

These are round dome shaped buttons with an illuminating halo. They were introduced in November 2005[2].

ThyssenKrupp Korea usually use LED dot matrix display (with a scrolling arrow) for the floor indicators, but there are also elevators that uses a 16-segments display instead.

A ThyssenKrupp Dongyang directional arrow indicators. In some other elevators, this may be a LED dot matrix display instead.

ThyssenKrupp Korea made a few variants of hall lanterns, usually light up green for up and red for down.

Korean ThyssenKrupp hall lantern and floor indicator in Vietnam.
Add a photo to this gallery

Just after ThyssenKrupp Dongyang renamed itself to ThyssenKrupp Elevator Korea in 2008, ThyssenKrupp began updating some of their fixtures, as well as introducing a few new lineup of modern fixtures.

These are STEP Classic buttons branded as TK11 by ThyssenKrupp Korea. Both the halo and lettering light up white when the buttons are pressed. They also have braille marks under the lettering.

ThyssenKrupp TK11 buttons.
Add a photo to this gallery

Besides the TK11 series buttons, ThyssenKrupp also use Type 99 buttons for elevators made between the late 2000s and mid 2010s.

A typical Korean ThyssenKrupp LED floor indicator. This is the newer type.
Add a photo to this gallery

The following fixtures are exclusive to the South Korean market, and hence they are not sold in other Asian markets. They are used in the Korean synergy MRL[4] (starting in 2014 or maybe earlier, now discontinued), enta200 MRL, meta200 MR and zeta200 MR elevators.

ThyssenKrupp Korea made two types of fixtures for their Korean synergy MRL elevators.

These fixtures use black tempered glass panel with white illuminating built-in touch sensitive buttons known as TT22 (also known as Smart Touch Button on brochures). The floor indicators are the same as the ones used in the non-touch sensitive fixtures, which is a full colored LCD display on the inside and white LED dot matrix display on the outside. These fixtures are only used in the Korean synergy MRL elevators in South Korea.

The fixtures used in the thyssenkrupp enta200 MRL elevators are similar to the Korean synergy elevators, but the glass panels is white instead of black. In addition, a bigger LCD display with updated background and font has been introduced; instead of white segmented font, it now uses ThyssenKrupp's TK Type font.

These fixtures are currently used on the meta200 MR elevators in South Korea. The landing and car stations are either bronze, dark, light or gold colored stainless steel with TK77 buttons. The floor indicator used in car station is a tilted LCD screen (with the TK Type font for the number and letters), while the one used in the hall/landing station is a LED dot matrix display.[5]

The zeta200 high rise MR elevators use either meta200 style fixtures (with either TK77 or TK11 series push buttons and tilted LCD indicator on the inside), or Smart Car Operating Panel fixtures (see below for details).

These are glass fixtures used for the meta200 and zeta200 MR elevators in South Korea. These fixtures includes an LCD floor indicator with current speed and registered floors, as well as smart car operating panel with keypad style button layout (the buttons are either mechanical or touch sensitive). It also supports handwriting capability in which the user draw their desired floor number directly on the touch screen, similar to Hyundai's touch screens. Other features includes a custom floor directory, floor locking and a built-in (hidden) security camera.[6] The design is not very similar to Sigma/Otis Korea's MiniTouch fixtures. These fixtures were only found in Korea so far, but they aren't exclusive to the South Korean market.

An illustration of SMART Car Operating Panel by thyssenkrupp Elevator Korea, with the parts shown.
Add a photo to this gallery

Retrieved from "https://elevation.fandom.com/wiki/List_of_Korean_thyssenkrupp_elevator_fixtures?oldid=76766"
Community content is available under CC-BY-SA unless otherwise noted.