This is a list of elevator fixtures that have been used by Johns & Waygood (later Johns Perry Lifts in the 1980s and Boral Elevators in the 1990s) in Australia and sometimes New Zealand.

In the 1960s, Johns & Waygood used clear buttons that were either square or round buttons. The square buttons were shaped like Schindler R-Series buttons. The door control and alarm buttons are small black buttons. Door control buttons were simply labelled as "O" and "C" for open and close respectively. Floor indicators are simple floor counters with illuminating numbers and triangle arrows.

Some Johns & Waygood elevators in the 1960s used black buttons that do not light up, rather like Otis' vintage black buttons. 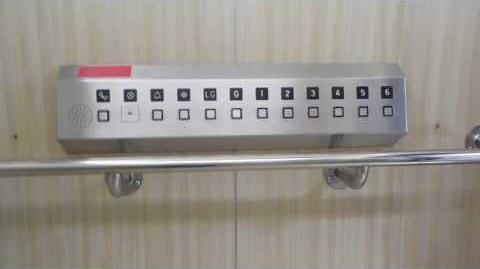 After changing name from Johns & Waygood to Johns Perry Lifts in the mid 1970s, the company updated the fixtures. The round glass buttons were no longer available. The square buttons remain unchanged, only the black door control and alarm buttons have been replaced into square ones. The floor indicators have been changed into floor counter bars with illuminating numbers. On late models, especially Mipro-Log elevators, the car floor indicators used LED dot-matrix display, and some elevators a text bar showing scrolling text above the floor number and arrow.

Boral continued to use these fixtures after acquiring Johns Perry Lifts throughout the late 1980s.

Retrieved from "https://elevation.fandom.com/wiki/List_of_Johns_Perry_Lifts_elevator_fixtures?oldid=73187"
Community content is available under CC-BY-SA unless otherwise noted.