This is a list of elevator fixtures that have been used by Indolift, a defunct Indonesian elevator manufacturer.

These are dome shaped glass buttons which light up entirely when pressed. They are mainly used in 1980s Indolift elevators.

1980s Indolift alarm button. Notice the small overload lamp above it.
Add a photo to this gallery

1980s Indolift hall lanterns. When lights up, they will display an orange transparent arrow.

These are round dome shaped grey or brown colored buttons with an illuminating character in the middle. After Indolift was acquired by Kone in the mid 1990s, Kone continued to use these buttons for a few times until around the late 1990s[1].

1990s call station with Indolift grey buttons. The up button is wrongly positioned. 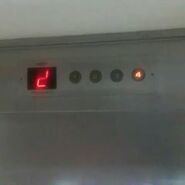 1990s Indolift call station, with a circle on the button instead of an arrow.
Add a photo to this gallery

These are black buttons with white character (yellow for alarm button, and red for emergency stop button) and an illuminating halo.

1991 Indolift car station with black round buttons.
Add a photo to this gallery

These are silver round buttons with engraved character and an illuminating halo. The button characters are the same as the ones used by Fujitec in the mid and late 1990s. Kone reused these buttons after the merger with Indolift on their Indonesian-style Kone elevators until the late 1990s. It is unknown if there are Indolift installations using these buttons.

Closer look of the button.
Add a photo to this gallery

Indolift mostly used 7-segments digital display for the floor indicators. Most of the time they only used single digit, but some elevators used two digits to support more numbers. There are also very few elevators using 16-segments digit or even LED dot-matrix displays. On later models, most indicators have Kone M-Series style triangular arrows made of six horizontal strips. There are also external digital floor counter with triangular hall lanterns which lights up in orange.

Most 1990s Indolift elevators used rounded hall lanterns. There are two types; one is made of acrylic block which light up in white and sometimes yellow orange, and another is just a black round display where red Kone M-Series style triangular arrows would light up. On the main floor, there will usually be hall lantern(s) above and a digital floor indicator below the lantern(s). There is also another type of hall lantern consist of triangle-shaped arrows positioned horizontally above the landing door. Sometimes a digital indicator can also be in the middle

On the main floor, there is one floor indicator and hall lanterns (either single or double lenses). 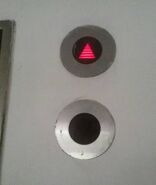 1995 Indolift terminal floor hall lantern, with the bottom display is the floor indicator.

1990s Indolift hall lanterns with a digital indicator below them.

1999s Indolift hall lanterns with a digital indicator.
Add a photo to this gallery

Retrieved from "https://elevation.fandom.com/wiki/List_of_Indolift_elevator_fixtures?oldid=76086"
Community content is available under CC-BY-SA unless otherwise noted.