A lot of old Hyundai elevators used either square or barrel shaped buttons with a protruding metallic square frame and a red illuminating number or symbol in the middle of the button. 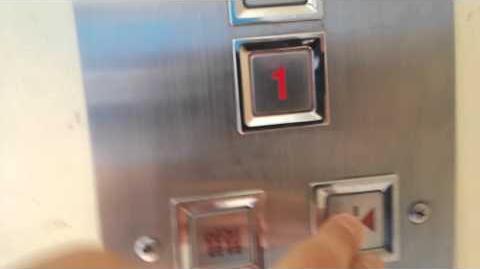 A very rare button variation. These are white buttons which lights up entirely and has a black frame. These buttons resembles a bit like the buttons used by Mitsubishi and Westinghouse (in the United States) elevators in the 1980s.

Hyundai also made touch sensitive buttons which are square with a wide illuminating halo. These buttons are extremely rare.

These buttons light up yellow orange when pressed.

These are barrel-shaped buttons made of glass with a silver halo. They light up red when pressed. These buttons were discontinued sometime in the mid 2000s.

These are stainless steel barrel-shaped buttons which light up red when pressed. They can have braille marks under the number or symbol as an option.

Hyundai Type 30 buttons.
Add a photo to this gallery

These buttons look and press like Dewhurst's older US89 Compact buttons used in the 1980s and 1990s, except that it has a halo and an illuminating number/symbol in the middle. These buttons are usually found in older Hyundai elevators from the early 1990s.

Hyundai started using LED dot matrix floor indicators in the early 1990s. These indicators have a very similar LED number/letter pattern to Dover's LED pattern that is commonly used in their Impulse fixtures. They also features a unique animating directional arrow in which the arrow "jumps" every time the car is moving. Hyundai also used 7-segments display with simple triangle directional arrows, but this is very rare. Also, all elevators installed from the early 1990s onward have illuminated "AUTO" lamp on the indicators (both inside and outside), which stays illuminate when the elevator is set to normal operation, even when it is idle and not in use.

One of the earliest examples of 1990s Hyundai elevator with LED floor indicator. Notice the 1980s intercom and nameplate.
Add a photo to this gallery

Hyundai's standard hall lanterns used in the 1990s are triangle shaped, and they would light up green for up and red for down. Each lenses are slightly tilted, the down lens is tilted upward while the up lens is tilted downward, similar to the hall lanterns used by Schindler from the 1970s to 1990s. Apart from that, there are also elevators with custom designed lanterns in various shapes, usually made according to the client's requests. 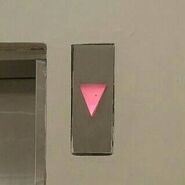 Hyundai continued making the Type 30 buttons until they were completely discontinued sometime in the early 2010s.

Newer Type 30 metal buttons.
Add a photo to this gallery

A lot of Hyundai elevators installed between the mid 2000s to mid 2010s use these buttons, which are round concave buttons encased in a silver barrel shaped frame. Both the halo and number/letter light up red when the button is pressed. These buttons always have braille marks under the lamp. Around the early or mid 2010s, Hyundai stopped making these buttons, and continued on with the Type 41 and the newly released Type 64 buttons as the successor of Type 40. 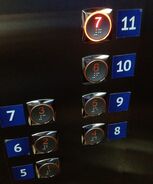 Hyundai Type 40/41 alarm button.
Add a photo to this gallery

These are round concave buttons with both an illuminating halo and number/letter, and braille marks. Much like the Type 40 buttons but without the silver barrel shaped frame. Type 41 buttons are still made by Hyundai, and they are the successor of the now discontinued Type 40.

Type 41 call buttons, which were wrongly installed.
Add a photo to this gallery

These are rectangular convex buttons with an orange illuminating lamp on the left, as well as a red illuminating number/letter on the button itself. These buttons might have been discontinued.

Hyundai call station with Type 51 buttons.
Add a photo to this gallery

Hyundai continued using floor indicators with LED dot matrix display as a standard feature. These indicators comes in several different shapes, and can be on the hall/car station or above the hall/car door (overhead). There are two LED colors; one is red which are normally found in geared traction (STVF) and MRL (SSVF/YZER) models, and the second one is orange which ones are normally found in Hyundai LUXEN (LXVF), iXEL and The EL elevators. By default, the indicators comes with two numbering digits (excluding the arrow above them), but some indicators can be configured to have three digits to display custom floor numbers.

2011 Hyundai floor indicator with orange LEDs. This indicator originally had red LEDs before they were replaced in 2013.

Besides LED displays, Hyundai also use LCD screens for the floor indicators. These indicators has a blue background, white number/letters, and an animating V-shaped arrow in the same style as the LED arrows.

Hyundai HELIAS destination dispatch elevator with LCD screen outside, showing the registered destination floors.
Add a photo to this gallery

2000s Hyundai car station with STEP buttons in Bandung, Indonesia.
Add a photo to this gallery

These are round convex buttons with green illumination. They don't have braille marks.

These are round silver concave buttons with an all-green illumination. It is intended to replace the current Type 40 series buttons. In some installations, the door open button is wider than the rest of the buttons. This is intended to avoid confusion with the door close button. There are also elevators in which the button for the main/exit floor has a green ring to make passengers easier to go to the main floor and/or leave the building.

The same hall station, featuring a down arrow on the indicator.

Hyundai car station with Type 64 buttons. Notice the wider door open button, which was made to avoid confusion with the door close button.

Two Hyundai hall stations in Bandung, Indonesia with Type 64 buttons.
Add a photo to this gallery

These buttons are the same as Type 64, except that the arrow light up white instead.

This is a bar shaped button with white illuminating symbol, and has a green illuminating line under the symbol.

These are the same as Type 80 except that they have an all-green illumination.

These are round touch sensitive that are flushed into the panel. The halo light up green when the buttons are touched.

These buttons are shaped like real number/letter/symbol, and protrudes from the panel. They light up either yellow orange (standard) or green (optional, a very rare variant)

These are square buttons with illuminating halo and number/symbol.

These buttons look the same as Type 64 except that they are convex instead of concave.

By the late 2010s, both Type 40 and 41 buttons are still available but not as common as they were before. They appear to be exclusive for the WBST series (geared traction) elevators. 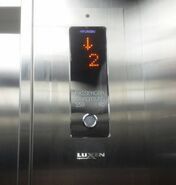 Hyundai LUXEN elevator with orange LED indicator. This is an older design of floor indicator.

The same indicator. The arrow only appears when the car stops at a floor, followed by the corresponding floor number (in sequence).

The same hall station, with a down arrow shown whe the car stops at a floor followed by the corresponding floor number (in sequence).

This is a large LCD indicator installed above the car door, featuring white segmented number, orange colored animating arrows, date and time and icons. These icons indicates, located on the left hand side of the indicator, certain features that are implemented and currently active in the elevator, they are:

Further to the right hand side of the indicator is a unique animation to indicate that an Air Clean Function is being activated in the elevator car.

These indicators are quite common in South Korea, but extremely rare in other countries. Smart Indicators are optional indicators that belongs to the "Deluxe" indicator category.

These touchscreen are often used in elevators working with HELIAS destination dispatch as hall stations. They are also used on car stations for non-HELIAS elevators. 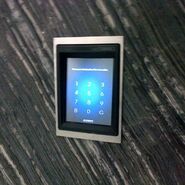 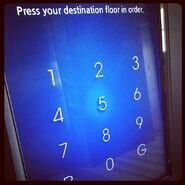 A closer look of the touch screen. 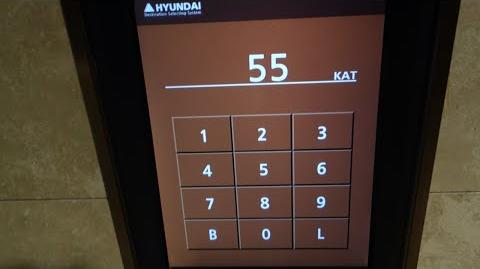 These are keypads used for Hyundai elevators working with HELIAS destination dispatch. 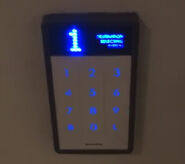 Hyundai elevators installed in the United States have two types of buttons; one is round white which resembles round Innovation Universal buttons, and one is a round solid metal with a red dot on the center but they are only being used on the hall station (it is unknown of those buttons are also used on the car station). Floor indicators are simple rectangular floor counter with red LED dot-matrix display.

Some modern Hyundai elevators still use fixtures made by Shanghai STEP. Elevators with custom made fixtures also exist.

Custom? Hyundai digital indicator.
Add a photo to this gallery

In 1990s to early 2000s, Hyundai used two stage chimes for upwards and one stage chimes for downwards. The chimes have two versions with varying pitches. The high-pitched chime is prevalent in elevators before early 2000s while a modified version of the chime is prevalent in elevators around 2000 to 2005. The modified version was available even in the newer versions of Hyundai elevators, although rare. Some elevators can only have one stage or two stage chimes in both upward and downward, or the chimes are shuffled unlike the default installation.

Also, some Hyundai elevators manufactured by Shanghai Hyundai (outsourced) since 2016 have very different chimes. The upwards chime is one-stage while the downwards chime is two-stage, reminiscent of Sigma elevators.

Retrieved from "https://elevation.fandom.com/wiki/List_of_Hyundai_elevator_fixtures?oldid=67057"
Community content is available under CC-BY-SA unless otherwise noted.