This is a list of Haushahn elevator fixtures. Haushahn has used different fixtures over the time, most of them were manufactured on their own but sometimes they used generic buttons made by Schaefer.

1923 hall button.
Add a photo to this gallery

In the 1950s, Haushahn introduces black buttons without illuminating lamp. The hall station had a round red lamp above the call button. 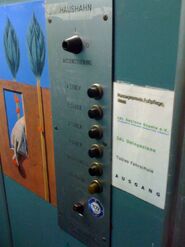 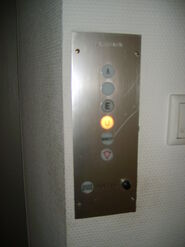 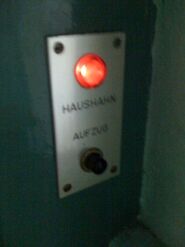 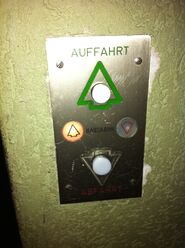 In the 1960s, the fixtures were round plastic buttons with lamp.

Haushahn 1960's highrise car-station.
Add a photo to this gallery

These fixtures have round plastic buttons which will lights up when pressed. Some elevators have the generic "Schaefer" buttons.

Car station with generic "Schäfer" buttons used in department stores.
Add a photo to this gallery

Haushahn introduced modular style fixtures in the early 1980s. These fixtures were very common until in the late 1990s. First with the buttons used in 1970s and later with Schaefer's MT 28 buttons. The Module fixtures were available in black and grey colored faceplates. Floor indicators were mostly LED dot-matrix but some elevators had LCD display floor indicators.

Black module fixture which replaced the old fixture from 1950s.

1994 Haushahn LED floor indicator.
Add a photo to this gallery

Schaefer LED floor indicator.
Add a photo to this gallery

Some older Haushahn elevators made after the company was sold to Schindler use Schindler's FI MXB. It is unknown if the vandal resistant variant, FI MXV, was also used by Haushahn.

Newest hall fixtures.
Add a photo to this gallery

These are basically the same as the one used in the Schindler 3100, 3300, 6200 and 6300 elevators. Haushahn's version of FIGS is used on the Haushahn lifeLine, lifeLine MOD, lifeEdition and flexLine MOD elevators. There is also another version of FIGS with a black glass display and uses either the standard LED dot matrix or a TFT LCD display - this version is only used in lifeLine, lifeLine MOD and flexLine MOD models.

These are the same as the one used in the Schindler 5500 elevators. Haushahn's version of Linea fixtures is currently used on the Haushahn designLine, designLine MOD and maxxLine elevators.[1] 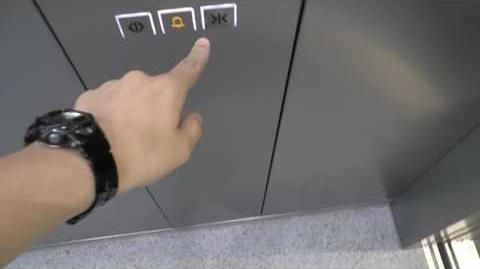 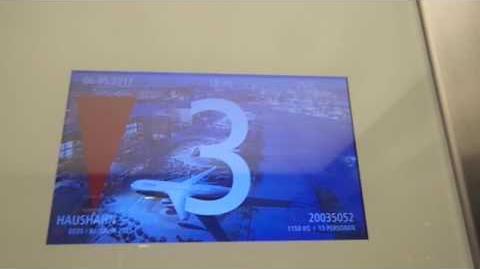 Haushahn still use Schaefer fixtures on some of their elevators even after the acquisition, but not as often as it used to be back in the 1980s and 1990s.

Retrieved from "https://elevation.fandom.com/wiki/List_of_Haushahn_elevator_fixtures?oldid=62508"
Community content is available under CC-BY-SA unless otherwise noted.