These fixtures are based on Hitachi's fixtures, and are used in the GoldStar E series (1970s) and GoldStar D series (1980s) elevators.

These fixtures consist of square buttons with an illuminating halo and analog floor indicators with illuminating squares. They were used up until the 1980s.

1970s GoldStar inside floor counter.
Add a photo to this gallery

These are similar to the buttons used by Hitachi in the 1970s. The call buttons had large square lens which light up orange and a small metallic square button in the middle. Some elevators may simply have rectangular buttons used as landing call buttons.

In Hong Kong, some GoldStar elevators have an additional operating panel for wheelchairs fitted with Dewhurst US81 push buttons. These are often found in private apartment buildings.

1988 GoldStar car station in Indonesia with its original buttons replaced with generic Korean buttons.
Add a photo to this gallery

It is believed that GoldStar began making touch sensitive buttons in the 1980s. These are rounded square buttons with a metal plate in the middle and illuminating halo.

In the 1970s and 1980s, GoldStar used analogue floor indicators which look very similar to Hitachi elevators. These indicators consist of illuminating squares with the number printed on them. GoldStar updated these indicators in the early 1980s, with a long black horizontal display inside the car where the numbers would illuminate on them in orange or red. Later examples feature a 7-segments digital display. GoldStar also had two different styles of hall lanterns in the 1980s which are accompanied with a digital floor indicator. The first one being a rounded glass with an arrow which lights up green for up and red for down. The second one being two smaller triangles enclosed on a glass which lights up green, red or yellow orange. 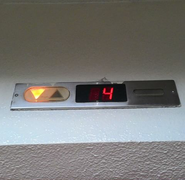 These are another fixtures that were based on Hitachi, but rarely seen. The buttons are wedged that light up orange when pressed, and the floor indicator is a digital segment display.

These fixtures consist of Hitachi's 1980s square buttons and a wide above door floor indicator with a digital segments display. The exterior floor indicators also use digital segments display. These fixtures are used in the GoldStar GS-P elevator model (sold from 1989 until 1995)[1], and are known to exist in South Korea. It is unknown if the elevator model was also exported to other countries.

Interior floor indicator of a GoldStar GS-P elevator in South Korea.
Add a photo to this gallery

This type of floor indicator has large display which consists of three rows of green LED dot-matrix text bar on the bottom, a large red segments display as floor indicator on the center, and green digital segments of date/time and temperature on the top. These floor indicators are very rare and were possibly made in the late 1980s or early 1990s for custom elevators. An example of this floor indicator was used in the elevators at Plaza Indonesia and Grand Hyatt Jakarta in Jakarta, Indonesia[2]. However, they were replaced into LCD when the elevators were refurbished by Sigma for the second time in 2012.

Some 1980s GoldStar elevators in South Korea used Mitsubishi fixtures due to a technical partnership between the two companies. These fixtures are exactly the same as the ones used in Mitsubishi elevators except that they bear the GoldStar brand instead. They are only found in South Korea.

These fixtures were used from the early 1990s up until GoldStar changed its name to Lucky Goldstar (LG) in the mid 1990s when they were continued to be produced by LG until the late 1990s. These fixtures use rounded black plastic buttons with an orange illuminating number and halo. The landing call buttons are much bigger than the buttons inside the elevator.

GoldStar made two types of panels for the buttons. The first one, which is the standard, distinctive and most common one, is a tall grey colored surface mounted panel with either a slanted or flat digital floor indicator display. The second one is just a flat stainless steel panel - this type is rare and is usually found in bed or freight elevators. The floor indicators uses 16-segments digital display accompanied with green, red or orange illuminating triangle arrows. Certain GoldStar elevator models have an analogue floor indicator where the numbers are displayed on a large black bar above the door inside the elevator. The alarm/intercom button is yellow and has either a phone or alarm (the latter is only for Hong Kong and Macau) icon.

In Hong Kong, some GoldStar elevators have an additional operating panel for wheelchairs which uses Dewhurst US81 push buttons. These are often found in private apartment buildings.

A full view of a typical 1990s GoldStar car station.

In some small buildings in Hong Kong, there have a handicapped control panel installed on the side of the cab which is using Dewhurst fixtures (but buttons replaced in modern days). 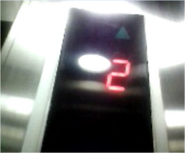 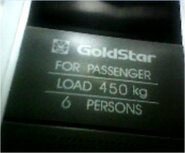 GoldStar analog indicator.
Add a photo to this gallery

This fixture consists of black square buttons and a horizontal floor counter above the door with a digital segment display. After changing name, LG continued making these fixtures until around the late 1990s. Later, Otis Elevator Korea (and its subsidiary Sigma) remade this type of floor indicator at some point before it was discontinued.

These fixtures are usually found in luxurious places and high-rise elevators.

These are square buttons with a white frame and illuminating halo. The floor buttons are black while the door control buttons are white. Floor indicators are digital segments with orange illuminating triangle arrows. These buttons are also used as hall call buttons outside the elevators. [3]

These touch sensitive buttons look the same like the black square buttons mentioned above, but the frame illuminates instead. Later example feature a beep sound when the buttons are touched. 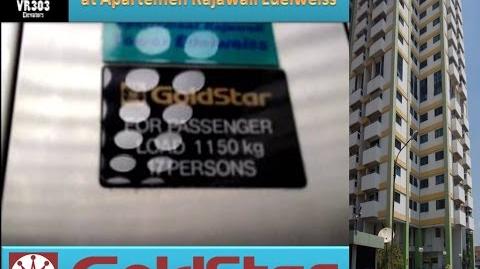 GoldStar also made a round version of the touch sensitive buttons but these are extremely rare. These buttons are either silver or black with an illuminating halo

Like all the other fixtures, GoldStar use a red 16-segments display along with two orange triangles as travel directions.

GoldStar had a few types of hall/landing floor indicators. The most common and distinctive type is the one that has a slanted digital display in the middle along with two flat displays on the sides where the arrow would be shown. This indicator are found above the landing doors, and are either incorporated into the transom panel or simply installed on the wall. Another type that was also used in the 1990s is a fully slanted display that is incorporated into the transom panel above the landing doors, featuring a digital segments display and two triangle arrows; each light up green for up and red for down. There are also vertical hall floor indicators which are installed separately next to the landing doors. Some elevators also have the landing call stations combined with a floor indicator. 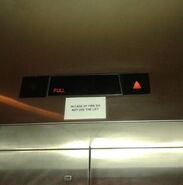 A typical 1990s GoldStar hall floor indicator. This is the version which is incorporated with the transom panel. 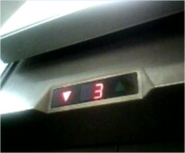 A 1990s fully slanted GoldStar hall floor indicator. This type of indicator is always incorporated with the transom panel.

GoldStar intermediate hall station from 1994 with a floor indicator.

A 1996 GoldStar vertical hall floor indicator.
Add a photo to this gallery

GoldStar had several styles of hall lanterns in the 1990s. The most common ones are the round glass lanterns with or without a triangle arrow. Another style was the vertical bar lanterns, with the lanterns protrude from the panel. All of these lanterns light up green, red or orange.

Some GoldStar elevator models in South Korea used Mitsubishi fixtures due to a technical partnership between the two companies. Examples of these are the ones with black square buttons and a simple digital floor indicator featuring orange colored 7-segments display; these are used in the AC-E4LP models. They are only seen in South Korea.

In Hong Kong, GoldStar elevators installed in Public Housing Estate and Home Ownership Scheme blocks as well as government buildings in the 1990s used Dewhurst fixtures. The fixtures used in public housing blocks consists of US81 braille buttons and UL200 floor indicators. However, some of these elevators already had their buttons replaced into other generic fixtures in the 2000s and 2010s due to durability reason[4].

In Singapore, all GoldStar elevators installed in blocks built by the Housing and Development Board (HDB) in the 1990s were required to be fitted with Dewhurst fixtures as well, which consist of US90-15 push buttons and ULS47H LED floor indicators.

1990s GoldStar car station (The car buttons has been modernized).

1990s GoldStar secondary car station (The car buttons has been modernized).
Add a photo to this gallery

From the 1970s to 1990s, a single tone mechanical bell sound was used as arrival chime. Some elevators in the early 1990s are using electronic chimes instead of Hitachi-like mechanical bell[5]. Some modernized GoldStar elevators have the bell or chime replaced to Sigma's chimes[6].

Retrieved from "https://elevation.fandom.com/wiki/List_of_GoldStar_elevator_fixtures?oldid=76991"
Community content is available under CC-BY-SA unless otherwise noted.