This is a list of elevator fixtures that have been made and used by Express Lifts of Northampton, England.

These are black lozenge shaped buttons with label in the middle and do not light up when pressed. The call station has a green "LIFT COMING" lamp which is shaped like the buttons.

Lift Coming lamp (credit to WaygoodOtis).
Add a photo to this gallery

Express Lift Series 1 buttons would also work as illuminating lamps for floor position indicators for most elevators installed in the 1960s. These lamps have green illuminating numbers.

In the 1970s, Express updated these buttons with different labeling, but they still didn't light up when pressed except for the landing call stations.

This are grey lozenge buttons with two red lights on both sides.

In the 1970s, Express Lift used floor counters with illuminating numbers and arrows that resembles an Otis display. In most cases, the arrows on the hall indicators are in between the numbers. There were also car lanterns installed on the back wall of the elevator wall.

These buttons are made of glass and would light up by conventional bulb. 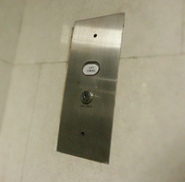 These are square buttons that look just like the lozenge buttons.

Express still used the same 1970 analogue indicators in the 1980s. By the mid 1980s, a digital indicator with segmented or LED dot matrix display began appearing.

1980s Express digital floor indicator in Singapore.
Add a photo to this gallery

From the late 1980s to late 1990s, Express Lift used lozenge shaped buttons with a red line under the number or letter. These buttons could be metal or glass.

By the 1990s, Express used either segmented or LED dot matrix display for the floor indicators.

Express Lift car station in Hong Kong, with Dewhurst US90-15 buttons (originally US81) and UL200 Hidden Legends as direction indicators.

1988 GEC Express elevators with UL200 Hidden Legend indicators in a Hong Kong Public Housing Estate. This is used in the lift tower of Yue On Court.

UL200 hidden legend indicators used in a 1995 GEC Express elevators in a Hong Kong Public Housing Estate. This is in the lift tower of Tung Hei Court.

UL200 hidden legend indicators in a 1993 GEC Express elevators in a Hong Kong Public Housing Estate. This was found in Fu Tak House, Tai Wo Hau Estate.
Add a photo to this gallery

In Singapore, Express elevators installed in public housing blocks built by the Housing and Development Board (HDB) between 1994 and 1996 also used Dewhurst fixtures, with US100 (vandal resistant) buttons and ULS47H LED floor indicators[3]. However, some high-rise installations found in Toa Payoh used different buttons which were not made by Dewhurst.[4]

A typical Express Lift installation in a HDB block in Singapore, with Dewhurst ULS47H LED floor indicators. This was found in Block 5 Boon Keng Road.

Express Lift car station with Dewhurst US100 buttons in a Singapore HDB block. The nameplate is also standard for Express Lift installations in HDB estates.

Older Dewhurst US100 push buttons in a 1990s Express Lift elevator in a HDB flat in Singapore.

A high-rise Express Lift in a Toa Payoh HDB block with Dewhurst ULS47H LED indicator.
Add a photo to this gallery

In New Zealand, there are two Express Lift installation having Adams Designer/Epco WN Signature buttons. One is at The Warehouse in Tory Street, Wellington[5], and the other one is at Prime Restaurant in Queenstown.[6]

Retrieved from "https://elevation.fandom.com/wiki/List_of_Express_(United_Kingdom)_elevator_fixtures?oldid=65442"
Community content is available under CC-BY-SA unless otherwise noted.