This is a list of elevator fixtures that have been used by Elevators Pty. Ltd., or commonly known as EPL KONE.

These fixtures consists of white rounded square buttons which simply illuminates, and analog floor indicators with illuminating numbers. A variant of these buttons with a surface-mounted clear plastic frame was also available. 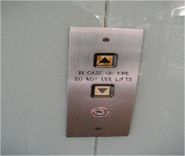 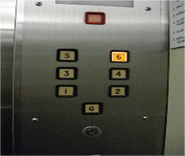 Another EPL KONE white buttons with illuminating lamp on the center. 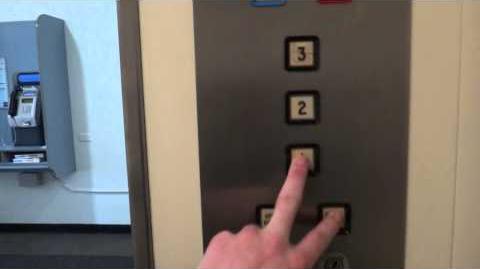 Starting in the late 1980s, most EPL KONE elevators were using black round buttons with illuminating halo (either green, orange, or red) and raised side. Floor indicators were normally green LED dot-matrix which resembles Montgomery Vector display, though other colours such as blue or red were available.

Kone continued to use this design of fixtures after EPL's dissolution for a select few installs, although such fixtures installed under the Kone name are exceptionally rare and normally in conjunction with their Traffic Master System until the late 1990s. The latest install known to use these fixtures was installed in 2000.[1] Floor indicators used with TMS were either the yellow Kone ELD indicator or the Novel Elements LED dot matrix indicator.

These are green (or rarely, yellow) monochrome floor indicators with time and date displayed. 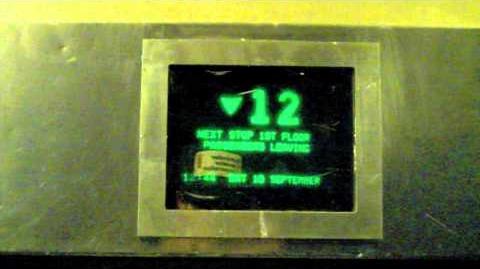 Rare yellow version of Synergy 2000.
Add a photo to this gallery

Some late model of EPL KONE elevators were using Kone's Novel Elements fixtures for the call buttons (either original or modernized) or Salient. Some lifts were even using Kone's yellow ELD indicator.

An example of a late model EPL Kone using Salient as seen at the Sydney Adventist Hospital. 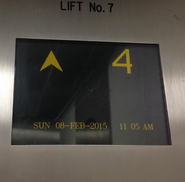 Retrieved from "https://elevation.fandom.com/wiki/List_of_Elevators_Pty._Ltd._elevator_fixtures?oldid=74155"
Community content is available under CC-BY-SA unless otherwise noted.