This article is about a list of fixtures that have been made and used by defunct Brazilian elevator company Elevadores Atlas. For the fixtures from Atlas Elevator Co. (Northern California), refer to this page.

This is a list of known elevator fixtures that have been made and used by Elevadores Atlas, a defunct elevator company from Brazil. Note that a few of these fixtures look very similar to Westinghouse's elevator fixtures in the United States due to the fact that both companies had a license agreement in the past.

In the 1940s, Atlas used round black buttons with slightly raised halo/frame. These buttons do not have lamp.

These are small, non-illuminating black buttons with the floor number printed on them. They look very similar to Westinghouse's 1950s black buttons in the United States.

These buttons look very similar to Westinghouse's 1950s-1960s white buttons that protrudes from the panel and have black font on them.

These buttons are transparent, have black font on them and would light up in orange when pressed.

These buttons are side wedged, with a round touch plate in the middle and a square illuminating halo, usually orange. 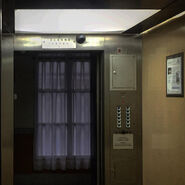 A look at the complete COP plus indicator in Juiz de Fora (Credit to Instagram user "kikocorreia").
Add a photo to this gallery

In the 1960s, Atlas used analogue floor indicators, with small Westinghouse-like numbers cut into the panel and would light up. The numbers go horizontally, from left to right.

These are round white buttons with black lettering and symbols on them, resembling Dewhurst's US92/ERM's CA-92 and Westinghouse's AE and RT buttons. There are two versions of these buttons; First Generation, in the early 1980s, that are circular white buttons that would light up in yellow (sometimes orange) and Second Generation, released in the late 1980s, which are the same buttons, but instead of the button, a small red LED above the numbers would light up. Some improvements were mad in the 2nd gen batch, such as the indicator now being a small 7-segments display. The fan and light switches as well as the stop buttons were ditched.

Late 1980s/Early 1990s Atlas call station with round white buttons. The upper station is a key switch for locking the floor externally, used in residential appilications.

Late1980s/Early 1990s 2nd generation Atlas Classe A car station with round white buttons. Notice the illuminations are located above the numbers.

1970s-1980s 1st gen Atlas Classe A car station with round white buttons. Above the buttons is the "Atlas-Villares" logo and alarm and stop buttons. 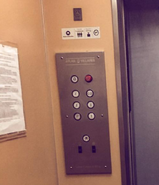 1970s-1980s 1st gen Atlas Classe A car station with round white buttons. Below the door open button are the fan and light switches.

1993 Atlas Classe A car station with round white buttons. The illuminations are positioned above the numbers.

1970s-1980s Atlas alarm and door open button. Below the buttons is the logo of Villares Group and capacity.

1970s-1980s Atlas alarm and door open button, both are push buttons. Also visible in this photo is the Villares group logo.
Add a photo to this gallery

These are the same buttons as the Classe A 2nd generation, only made in polished steel. They are extremely rare. 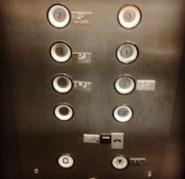 Also during this era, Atlas used triangle shaped "arrow" hall lanterns that look very similar to Westinghouse in the United States. These were used from the 1950s up to the first generation of the Classe A series. 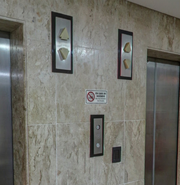 1970s Atlas "arrow" triangle hall lanterns in Brazil. These lanterns look very similar to Westinghouse's lanterns in the United States.
Add a photo to this gallery

Atlas continued making their 1970s-1980s round touch sensitive buttons in the early 1990s. This newer version had a smaller protruding halo that lights up in green when pressed.

Atlas used floor indicators with digital segments display in the early 1990s. This indicator was used with both touch sensitive and non-touch 2nd gen Classe A, but only in commercial applications.

1990s Atlas hall floor indicator with a digital segments display and hall lanterns.
Add a photo to this gallery

These fixtures look very similar to Classe A Vandal Resistant. These buttons consist of a horizontal rectangular polished steel button with a thin black halo around them and thin inscriptions with a small red LED above them. They were also used by Schindler as their Linha MS series.

Originally an Atlas project, it was then developed by Schindler in 1999. It consists of rectangle push buttons with a blue illuminating lamp on the side edge of the buttons, as well as a digital floor indicator. The external indicator has a curved rectangular shape and uses the same display and chimes as the Habitare line. These were the last fixtures Atlas have created before the buyout. After the buyout, Schindler (known as Atlas Schindler in Brazil) continued on making these fixtures for their Schindler NeoLift, a model of traction elevator produced by Atlas Schindler in Brazil and only sold in Central and South American countries. Atlas Schindler stopped making NeoLift in the late 2010s, so these fixtures have been discontinued.

Also in the late 1990s, Atlas made another line up of modern fixtures that would later be used in a model of Schindler elevator after the buyout; the Schindler 310L (Abitare) and Schindler 510L (Ufficio) which were only sold in Central and South American countries. These fixtures consists of either touch sensitive buttons with a red illuminating strip and three floor indicator options: 7-segment displays, red LED dot matrix display, or digital red display. It has a similar button layout and shape as the European Otis 2000 fixtures. It is unknown if these fixtures were also used in the Schindler/Atlas Schindler NeoLift elevators. These fixtures might have been discontinued.

Late 1990s Atlas Ufficio hall floor indicator. When the elevator arrives, arrows indicating the direction show up on both edges of the indicator.

Late 1990s Atlas Ufficio car floor indicator and buttons. Below the door controls are the fan and light switch, directional arrows and manual controls.
Add a photo to this gallery

Retrieved from "https://elevation.fandom.com/wiki/List_of_Elevadores_Atlas_elevator_fixtures?oldid=75545"
Community content is available under CC-BY-SA unless otherwise noted.