Most standard elevators were using the vintage black round buttons with white letterings during the 1960s. These buttons were made by GAL for Dover. The buttons are very simple without any illumination indication, except the hall stations, which have an in use light above the button. Additionally, there is no door close button; pressing a floor will close the door quickly and the car starts. Later on, the call buttons had a white halo around them, and an arrow on the button lit up green for up, and red for down, and the floor buttons had a white halo, which lights up when you press the button, but the door open and alarm buttons were not changed.

Dover traditional fixtures came out in 1968 and could either be a translucent illuminating button with a black halo or a black button with an illuminating halo. Sometimes, they could be black buttons with black halos, but these were found only on Dover elevators from the late 1960s and early 1970s. The floor counters were translucent wedge shaped illuminating blocks with black numberings - these style of lanterns were also used on elevators made by Dover's British subsidiary Hammond & Champness (H+C) as well as those installed in Canada by Dover distributor Turnbull (these were branded as "Dover/Turnbull").  In the mid 1970s, the black button with the white illuminating halo started becoming less common. By the late 1970's seven-segment digital floor counters became available.  By the mid-1980's, a door close button became common on Traditional fixtures.  By this time, the digital floor counter was a dot-matrix display instead of a seven-segment display. These fixtures were often called Dover Classic. 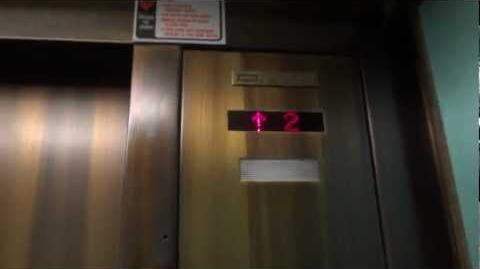 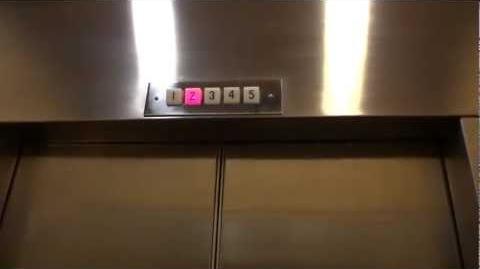 Not much is know about these fixtures as they are very rare, what is known is that the number in the middle lights up and the rest of the button is metal. These buttons resembles the regular Dover Traditional fixtures.

In 1982, Dover introduced Impulse, which was quite common and had a very distinctive look. The floor counter is slanted down 20 degrees toward the floor as are the nameplate, emergency lights, and capacity label. The buttons are square-shaped made of translucent polycarbonate with rounded corners and are slanted upward toward the ceiling. On some elevators, the buttons and floor counter are not slanted; these version of the Impulse are called Custom Impulse, and are not as common as the standard Impulse. Until 1994, the door close, door open, and alarm bell had blue braille plates, and the braille plates for door open, door close, and alarm bell were black post 1994.

The indicator often used red illuminated segments that used the same look of the numbers. For buildings with more than seven floors, a true digital indicator was used. ThyssenKrupp continued on using Impulse with minor revisions through 2001, but are now no longer made, and spare parts are still available today on special order. Impulse fixtures were also used on Dover elevators outside the US.

Impulse hall station installed by Hammond & Champness (or H+C Lifts), found in the University of Kent, England. Note the plate reads LIFT instead of a standard Impulse arrow (Credit to benobve).

A full view of a Dover Impulse car station in Singapore. 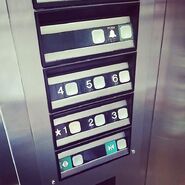 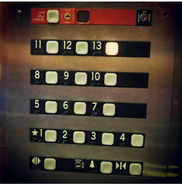 This H+C/Dover panel uses an Impulse data sticker.
Add a photo to this gallery

Vandal Resistant is a circle metal button with the light in the middle, the light can be either red or yellow. The indicator was either analog or digital.  The analog indicator featured a black circle around the numbers, and a small light (either red or yellow) was below each black circle. The digital indicator was the same one used with Dover Traditional fixtures. These fixtures were continued by ThyssenKrupp. There is also a California code compliant version, with buttons that look very similar to Schindler vandal resistant fixtures. In addition, the vandal resistant buttons utilized the same assembly as the Impulse buttons, with the dual micro-switch design. 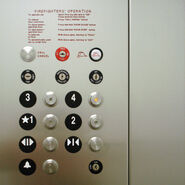 Dover VR Floor Indicator
Add a photo to this gallery

The "chirp" was discontinued in the mid-1990s and elevators from then on until 2011 used the piezo buzzer for the floor passing sound.

Retrieved from "https://elevation.fandom.com/wiki/List_of_Dover_elevator_fixtures?oldid=76550"
Community content is available under CC-BY-SA unless otherwise noted.