This is a list of elevator fixtures that have been used by Dong Yang, a defunct elevator company from South Korea which has been acquired by thyssenkrupp in October 2003.

Note that the majority of these fixtures used from the 1980s until 1999 were from Toshiba Elevator and Building Systems Corporation, as both Dong Yang and Toshiba had a technical partnership during that period. Dong Yang stopped using fixtures from Toshiba in 1999 after discontinued its partnership with Toshiba, and began making their own fixtures until thyssenkrupp bought the company in 2003.

These buttons are similar to the ones used by Toshiba in the 1970s-1980s apart from the lack of button frame.

Toshiba-style buttons used in Dong Yang elevator in Hong Kong. These are the touch-sensitive type but they are actually push button type.

Toshiba-style buttons used in Dong Yang elevator in Hong Kong. These are the push button type.
Add a photo to this gallery

These are the same rectangular touch sensitive buttons as the ones used by Toshiba in the 1980s. These were mainly used in high speed elevators.

These are basically similar to the ones used by Toshiba in the 1980s.

These are the same fixtures as the ones used by Toshiba in the 1990s, which consist of black square buttons with a grey halo and a green light (red for down hall call button). The only difference between this and Toshiba's version, is that the door control buttons uses different symbol. Also the call buttons often have triangle arrows instead of "arrowhead" arrows. The floor indicators uses a 16-segments display, these can be found on the hall/car stations or above the landing/car door. There are also analogue indicators with green illuminating numbers or illuminating rectangles/squares, but these are quite rare.

Dong Yang also had another version of the square buttons that are grey colored with white lettering and a green rectangular light on the top, but these buttons appears to be exclusive to South Korea. They are usually found in high speed elevators in high rise buildings.

1990s Dong Yang car station. Notice the panel is the same type used in Toshiba elevators at that time.

1990s Dong Yang car station. Notice the panel is the same type used in Toshiba elevators at that time.

1990s Dong Yang car floor indicator. Notice the panel is the same type used in Toshiba elevators at that time.

Another style of 1990s Dong Yang analog floor counter.
Add a photo to this gallery

These are the same fixtures as the ones used in Toshiba elevators installed between the mid and late 1990s. The inside buttons are small rectangle with a green light next to it, and are placed on a light brown or grey colored panel with two metallic sides. Dong Yang did not make the round buttons for these fixtures. Floor indicators could be a digital segments, or analogue display with illuminating green dots. These fixtures are very rare.

Dong Yang had many variants of hall lanterns which light up green for up and red for down. Examples of these are the triangle shapes (the standard ones), square shapes and the bar shapes from Toshiba. Some hall lanterns could also support a digital floor indicator on the same panel. 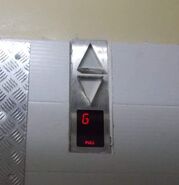 In Singapore, Dong Yang elevators installed in HDB residential, commercial and industrial blocks throughout the 1990s used Dewhurst fixtures which consist of US90-15 buttons and ULS47H LED indicators. These buttons light up red when pressed[1], but some of them have had their illumination replaced with green LED light.[2] Recently, a lot of older Dong Yang elevators in HDB blocks have been modernized by 9G Elevator with Tung Da fixtures, but the original Dewhurst LED indicators were retained.[3]

These buttons were used in Dong Yang elevators installed in the early 2000s, after the company stopped using fixtures from Toshiba as the result of partnership termination in 1999. These buttons are metal oval shaped with red illuminating halo and character. They were also used in elevators installed in HDB public housing blocks in Singapore between 2000 and 2003, which have braille marks to comply with disability requirements.[4]

Early 2000s Dong Yang car station, reused by ThyssenKrupp in 2010 as part of a refurbishment. 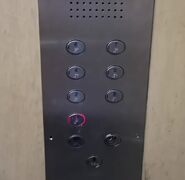 2000s Dong Yang car station with oval buttons at YS ONE, Singapore. Photo taken shortly before the elevator was modernized by Fujitec in 2018.

Closer look of the buttons.
Add a photo to this gallery

These buttons were used in very late Dong Yang elevators before they merged with ThyssenKrupp in 2003, and were used again by ThyssenKrupp Dongyang after the merger for a short time. These buttons look the same as the ones used in the 1990s, but have a silver halo. In addition, the door control buttons now illuminate when pressed. The bell icon on the alarm button has been replaced with a telephone icon.

Early 2000s Dong Yang capacity badge and floor indicator that was reused by ThyssenKrupp for refurbishment in 2010.

Dong Yang made several different variants of hall lanterns. Most of these light up green and red.

From 1980s to 1990s, Dong Yang used mechanical bell sounds to indicate the car's arrival. By the mid 1990s, electronic chimes became available, but some elevators during this time were still using bell chimes. In the early 2000s, Dong Yang updated its electronic chime, which consist of a single high pitched chime for up and two stages chime for down. After the takeover, thyssenkrupp, which at that time were operating as ThyssenKrupp Dongyang until 2008, continued to use these chimes until around the 2010s.

Retrieved from "https://elevation.fandom.com/wiki/List_of_Dong_Yang_(South_Korea)_elevator_fixtures?oldid=77032"
Community content is available under CC-BY-SA unless otherwise noted.