This is list of different elevator fixtures that have been made by DMG. 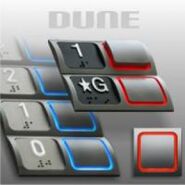 BN Dune illustration.
Add a photo to this gallery

These are large sized rounded square buttons with illuminating halo and tactile legend. In North America, these buttons are branded as MAD Colossus. 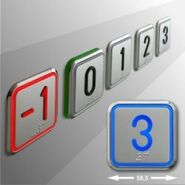 DMG wheelchair height car station with B7 Maxxi buttons.
Add a photo to this gallery 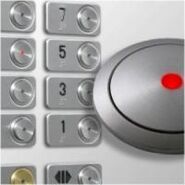 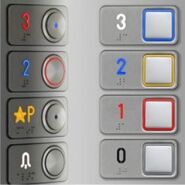 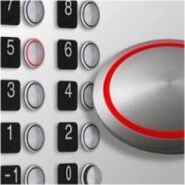 BS Sherman Classic illustration.
Add a photo to this gallery 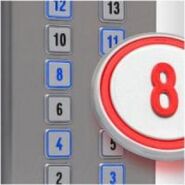 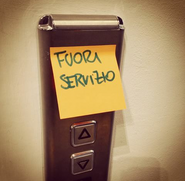 Round DMG BL buttons with pillowed frame around the button. 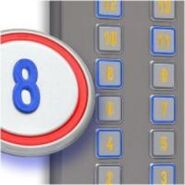 These fixtures consist of oval shaped buttons, with a halo that lights up. The button might be on only one side of the oval, but this is unconfirmed. This button is also available with dual illumination. These fixtures are not sold in North America.

These fixtures consist of round buttons (stainless steel, inox, PVD gold, black coated or bronze) with a halo that lights up and a braille on the button. It can also be dual illumination, in which the tactile illuminates in a different color. These fixtures are not sold in North America.

DMG BM Macro buttons.
Add a photo to this gallery

These fixtures consist of round buttons, with or without a braille on them, a halo that lights up, and a frame around the button that can be round (series K), pillowed square (series F), or pillowed rectangle (series B). The button can be made out of plastic, stainless steel, or PVD (brass like coating). These fixtures are not sold in North America, but have been seen imported on ThyssenKrupp LEV elevators (pillowed square frame, plastic buttons). 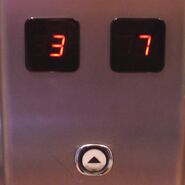 These buttons look very similar to the push buttons used by Schindler on their FI GS, Linea 100 and Linea 300 fixtures. These buttons can be flushed or surface mounted, and can have dual illumination which would illuminate in a similar fashion as Schindler's Linea 100 and 300 push buttons. These fixtures are not currently sold in North America, but will possibly be sold there in the future, which would probably to be branded as MAD BL Series. 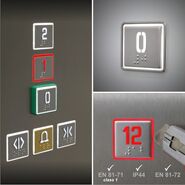 BR Dardo illustration.
Add a photo to this gallery

B5Q[1] is one of DMG's older button series which have been discontinued. These buttons are made of clean plastic which lights up entirely when pressed (if the buttons have illumination). They were also possible to be mounted on DMG's older Caprice button panels[2]. DMG's B5Q buttons were also used in some Koppel A.W. elevators[3].

Closer look of the DMG B5Q button being pressed.

DMG uses Eurocylinder, KABA or VIRO Cylinder keyswitches. There is also Smart Key, which is an electronic key switch.

These are digital floor indicators with a red LED segments display. These indicators can be square or round.

These LED floor indicators uses either a digital or dot matrix display. They are commonly used by Schindler as part of their FI MXB and FI MXV fixtures. It is unknown if DMG still make these indicators.

DMG makes several types of TFT LCD displays for floor indicators, they are:

These are touch screen fixtures made of black tempered glass. They consists of touch sensitive buttons and LCD floor indicators, and can be surface or flush mounted.

These are surface mounted fixtures made of stainless steel, with square push buttons and a vertical black trapezoid shaped display where an LCD floor indicator is shown.

These are flushed mounted car stations.

These are surface mounted fixtures.

These are flushed mounted fixtures with rounded top and bottom side, and can be stainless steel, bronze or mirror.

These are surface mounted fixtures with rounded top and bottom side, and can be stainless steel or PVD gold.

These fixtures are similar to Gilda Silverlight, except that the rounded sides are more rounded.

These are surface mounted rectangular fixtures with polycarbonated corners. They can be stainless steel or PVD gold.

These fixtures are similar to Gilda Corner, except that both the top and bottom side are fully covered by polycarbonate.

These are flushed mounted fixtures with rounded corners. DMG also makes a version of these fixtures with a rounded top which comes in various styles.

These are surface mounted angled horizontal car stations designed for passengers on wheelchair, similar to Schaefer's angled panels. These panels can be a single or double row, and are usually fitted with B7 Maxxi buttons for accessibility reason.

These are pretty basic and simple with boxless surface mounted panel, round buttons and digital floor indicator. These fixtures are normally used for residential elevators in private homes.

An illustration of DMG's fixtures for residential elevators.
Add a photo to this gallery

Retrieved from "https://elevation.fandom.com/wiki/List_of_DMG_elevator_fixtures?oldid=61979"
Community content is available under CC-BY-SA unless otherwise noted.