This is a guide of elevator fixtures manufactured by Adams Elevator.

Survivor/PLUS (also known simply as "Vandal Resistant") are round vandal resistant push buttons that have a patented “coined pocket” designed to support the button by the metal panel. It has two types; illuminated (with a small lamp on the center of the button), and non-illuminated (without lamp). There is also a California code compliant version, which is used for Schindler's vandal-resistant MT and HT.

Designer are square push buttons with black frame and white surface with the floor number displayed on the surface. They can also be equipped with black braille plates which are sold separately. Like Survivor, these pushbuttons have either incandescent or LED illumination and are sold separately. There is also a California code compliant version. Epco's version of these buttons is called "WN Signature". 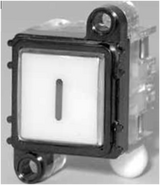 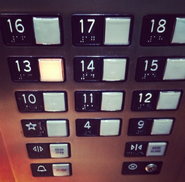 Classic are oval push buttons with round white buttons and black braille plate, which both are enclosed together. Classic pushbuttons are mounted on Survivor base.

Classic pushbutton.
Add a photo to this gallery

This is an Otis Series 1 ripoff car station.

Eclipse is a round metal button with halo. It is unknown if these buttons are still manufactured.

Schindler transferred the HT product line to Adams in 2017. So that they can produce the component replacement.

Retrieved from "https://elevation.fandom.com/wiki/List_of_Adams_elevator_fixtures?oldid=75529"
Community content is available under CC-BY-SA unless otherwise noted.