The Express Lift Company was the elevator (lift) division of General Electric Company plc (GEC), based in Northampton, England. When existing, it was one of the UK's largest non-foreign-owned lift manufacturers. It was acquired by Otis in 1997.[1]

The Express Lift Company was formed in 1917 as a merger between Easton Lift Company and The General Electric Company (GEC). In the 1920s, the company began using Ward Leonard equipment under license from Westinghouse. In 1930, Smith, Major & Stevens merged with Express Lift[2] and productions moved to the Abbey Works in Northampton.

The company installed its first escalator in 1932 at the Earl Court Exhibition Centre in London. The escalator was based on Westinghouse's design.

The National Lift Tower (previously called The Express Lift Tower and known locally as the 'Northampton Lighthouse') is a lift testing tower built by the Express Lift Company located in Weedon Road in Northampton, England. The structure was commissioned in 1978 with construction commencing in 1980, and was officially opened by Queen Elizabeth II on November 12, 1982. 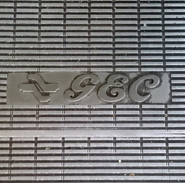 The new logo used in the United Kingdom.

Inside one of the two Express Lift elevators (Lift A) at Block 5 Boon Keng Road HDB, Singapore.
Add a photo to this gallery

Retrieved from "https://elevation.fandom.com/wiki/Express_Lift?oldid=69465"
Community content is available under CC-BY-SA unless otherwise noted.