An Elevator controller is a system to control the elevators, either manual or automatic.

Early elevators had no automatic landing positioning. Elevators were operated by elevator operators using a type of deadman's switch (either a car switch, or constant pressure controls). The controller on this type of elevator would often not have many relays. Some older freight elevators are controlled by switches operated by pulling on adjacent ropes (also known as "shipper rope" operation). Safety interlocks ensure that the inner and outer doors are closed before the elevator is allowed to move.

Later on, Otis introduced manually controlled elevators with automatic leveling. The operator could still control the speed, but when they released the controller the elevator leveled smoothly to the nearest floor in that direction. This was one of the first steps towards full automatic control of elevators.

Signal operation elevators still required an operator, but required much less effort to operate. To operate a signal operation elevator, first, you push a switch in the direction you want to travel. Then, you press a floor button. The floor buttons are pop-out buttons. There are no floor buttons for the top and bottom floors. If you are going to the top or bottom floor, there is no need to press any buttons. Then, there is a crank. You pull the crank out, then pull it to start. Hold it there until the elevator starts moving. The doors will close, then the elevator will start moving. There are probably no door sensors, so don't close the doors until everyone has gotten inside the elevator. If there is a hall call, and the elevator is going in the direction of the hall call, and reaches the floor, the elevator will automatically stop at that floor. When the elevator stops, pull the switch to open, and hold it there until the doors completely open. There is also a call annunciator panel, like on manually-controlled elevator, to tell the operator where there are hall calls.

Automatic elevators began to appear as early as the 1920s. These electromechanical systems used relay logic controllers of increasing complexity to control the speed, position and door operation of an elevator or bank of elevators. Elevators with relay logic controllers have a device called a "selector". Mechanical selectors use analog controls and many moving parts to determine the car’s position. The selector uses magnetic tapes (often called selector tape) which is attached at the top of the car. When the elevator is moving, so does the tape, which moves the mechanical gears on the selector.

Otis introduces the world's first fully automatic relay logic controlled elevator system in 1924 called "Signal Control". Later in 1937, Otis introduce the Peak Period Control to automatically schedule elevator service during high-demand periods. It helped reduce the waiting time on any given floor by coordinating the movement of the building’s elevators.

Automatic elevators in the 1940s has the ability to change the car speeds, adjust their schedules to suit traffic demand and bypassing floors when the car is fully loaded. An example of this was the Otis "Autotronic Elevator" system which was introduced in 1948. A similar elevator system is also invented by Westinghouse in the 1950s called "Selectomatic" (or Express Lift DMR Control), while Dover came out with the "Computamatic" elevator system in the early 1960s.

Relay-controllers have the advantage over newer microprocessor based systems of being inherently fail safe because they are immune to failure due to programming error, or hardware crashes. Also, they are extremely robust - thousands of relay controllers are still in perfect operation which are 50-60 years old. The key disadvantages are size and power consumption - the number of relays required increases almost exponentially with the number of floors and the number of elevators being controlled. Relay controlled systems also have many moving parts and require more maintenance. For this reason, microprocessor based elevator controls have steadily replaced relay-based systems from the early 1980s onward.

Express Lift relay logic cabinet. The object on the bottom is a mechanical floor selector.

A closer look of the older Express Lift relays.

Schindler floor selector from the 1970s. 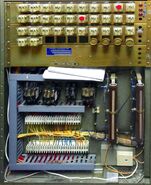 Beyond the passenger interaction are a series of sensors, controllers, sequences of operation and real-time calculations or algorithms that balance passenger demand and car availability.  Elevator sensors (some of them are using tape head) provide data on car positions, car moving direction, loads, door status, hall calls, car calls, pending up hall and down hall calls, number of runs per car, alarms, etc. The elevator controllers made in or before 2000s are typically Programmable Logic Controllers (PLC) that may be configured for a single car, multiple cars or sized by the number of stops and including interfaces for monitoring, voice synthesizers, etc. The controller may also have a function enabling the testing the systems without shutdown of the elevator.

Schindler "Miconic B" microprocessor controller from the early 1980s. 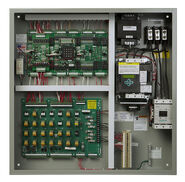 Most of the relevant data from the controllers is related to car activity: location, direction, load, and door status. From that data, a management system consisting of a workstation and manufacturer’s software application can then create metrics for a group or particular car such as total number of door openings, number of runs per car or call, up and down hall calls, etc. Some of the key performance indicators that facility managers would look for may include passenger “wait times during peak time’ or “time for a car to go from bottom to the top floor”. These metrics may indicate inadequate controls, misconfiguration or even equipment malfunction.

Many elevator manufacturers can now provide remote monitoring of the equipment through Software as a Service (SaaS). The monitoring looks for malfunctions or abnormal operating parameters and can alert a technician and/or the building owner. Some manufacturers provide customer dashboards accessible via a web browser and provide owners with information such as performance summaries and maintenance histories. This may work well for building owners who may not have that specialized expertise on staff.