Atlas Elevadores S.A. (also known as Elevadores Atlas or simply ATLAS and later Atlas Schindler) was an elevator company based in São Paulo, Brazil. They made residential, commercial and freight elevators as well as escalators and automatic parking systems. It was a subsidiary of the Villares Steel group.

The company was established on January 10, 1918 in the neighborhood of Cambuci, São Paulo, and started as a small workshop for elevator installation and maintenance known as "Lowsby & Pirie", named after the founders who were two English engineers, AM Lowsby and Frederich James Pirie. In the early 1920s, Carlos Dumont Villares joined the company and was renamed to "Pirie, Villares & Cia", but he died in an accident in 1922. His brother, Luiz Dumont Villares, took over the workshop. In 1926, Luiz, after visiting Westinghouse's factory in Pennsylvania in his honeymoon, establishes a technology sharing agreement between the American and Brazilian companies. Around the 1940s, the "Atlas" brand was established. In 1954, Atlas brings the first escalator and automatic parking system to Brazil. The company remained independent until May 24, 1999 when Schindler acquires 63.64% of the shares of Atlas Lifts. Later, Schindler was established in Brazil as "Elevadores Atlas Schindler S.A." (or simply "Atlas Schindler"). They are still the national leader in vertical transportation and manufacturing. They were also responsible for developing the Schindler NeoLift and other elevator models sold by Schindler in South and Central Americas. 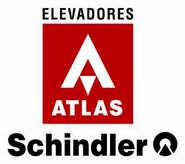 The new and current Atlas Schindler logo.
Add a photo to this gallery 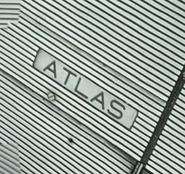 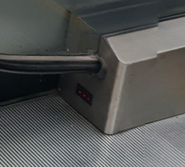 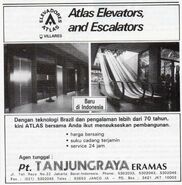 Elevadores Atlas advertisement in Indonesia, from a July 1991 edition of "Majalah Konstruksi" magazine. The caption reads "With Brazilian technology and over 70 years of experiences, ATLAS is now with you to succeed development".
Add a photo to this gallery 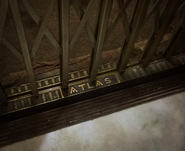 Atlas warning sticker telling passengers not to leave the car and wait for rescue in case of entrapment. Green logo is very rare.
Add a photo to this gallery

Retrieved from "https://elevation.fandom.com/wiki/Elevadores_Atlas?oldid=68559"
Community content is available under CC-BY-SA unless otherwise noted.