Defunct, absorbed to Thyssen as the holding company (Rheinstahl) was sold to Thyssen

Germany, and few other European countries

Eggers-Kehrhahn GmbH, or simply known as EK, was a manufacturer of elevators and escalators from Hamburg, Germany. It was the result of a merger between two Hamburg based companies in the 1950s; Stahlbau Eggers who worked in steel construction, and Kehrhahn who was an elevator and escalator manufacturer. The company was one of the elements that led to the formation of Thyssen Aufzüge GmbH in the 1970s, the predecessor of thyssenkrupp Elevator.

The origin of the company started out in 1865 when Heinrich Conrad Ernst Eggers, a locksmith, founded a small company in the old town of Hamburg. At that time, the company concentrated its business in supplying iron bases for sewing machines, safes and also locksmith related things before it switched to steel construction. By this time the company was known as Stahlbau Eggers.

Meanwhile, elevator manufacturer Kehrhahn was founded by Frederich Kehrhahn in 1899 a representative of Carl Flohr in Hamburg. In 1912, Kehrhahn bought Wimmel & Landgraf, a company which specialized in repairing Waygood & Co. paternosters imported from England. Wimmel & Landgraf had been bought by Hamburg-Ottensen based Maschinenfabrik Alfred Guttman in 1903 before Kehrhahn took over the company from Guttman. 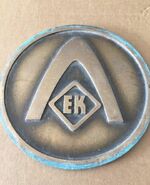 Rheinstahl Eggers-Kehrhahn "Marryat & Scott" logo on the escalators in the former Allders store in Croydon, England.

The nameplate of a 1967 Rheinstahl Eggers-Kehrhahn escalator in ILLUM, Copenhagen, Denmark.
Add a photo to this gallery

Retrieved from "https://elevation.fandom.com/wiki/Eggers-Kehrhahn?oldid=67234"
Community content is available under CC-BY-SA unless otherwise noted.