Dover Elevators was an American-based elevator manufacturer and was a division of Dover Corporation. The company manufactured passenger and freight elevators from 1955 to 1999, and was the 3rd largest elevator company. They still manufactures automotive lifts under the "Rotary Lifts" name.

Dover had its home/head office located in Memphis TN and manufacturing plants located in Horn Lake and Walnut, MS (opened in 1980[1]); Middleton, TN (opened in 1969[1]); and Mississauga, Ontario, Canada. The Middleton plant was for productions of elevator doors, entrances and signal fixtures. The Horn Lake plant was the production base for Dover's elevator structural components. The Walnut plant was the base of Dover's elevator controllers and drive systems productions[2].

Dover Corporation was originally known as Rotary Lift, a manufacturer of automobile lifts that opened in 1925. In 1940, Rotary Lift invented the modern hydraulic passenger elevator known as Oildraulic, which has become popular since and rivals such as Otis, Montgomery, Haughton, Westinghouse, etc. began making hydraulic elevators. Rotary changed its name to Dover Corporation and split the company into two separate divisions: Rotary Lift, which manufactures automobile lifts, and Dover Elevator Division, which manufactured passenger and freight elevators.

In 1958, Dover Corp. bought out Shepard-Warner Elevator. Since Shepard-Warner made geared and gearless traction elevators, Dover began making them in addition to hydraulic elevators as a result of the merger.

In 1971, Dover Corp. entered the British market by acquiring Hammond & Champness. Some of Dover's equipment installed in the United Kingdom from the mid-1970s onward were effectively branded as H+C or H+C Lifts.

On January 5, 1999, Dover Corp. sold it's elevator division to the German-based Thyssen Elevator, and changing the name into ThyssenDover Elevator. However, Dover elevators saw little change as a result of this buyout; the same fixtures and cab designs continued to be used, and ThyssenDover elevators were very rarely labeled as such in the cab or any readily visible areas (they are normally labeled as Dover). As a result of this, ThyssenDover elevators are usually only distinguishable by their date of manufacture. In 2001, Thyssen finished the merger with Krupp, forming thyssenkrupp. This marked the end of the Dover name in the elevator industry.

ThyssenKrupp continued on making Dover's Oildraulic (their version of hydraulic) until October of 2012 when they discontinued the it. It was replaced with the new Endura system, that is supposed to use new eco-friendly hydraulic oil and is said to be the same basic design as Oildraulic. ThyssenKrupp also continued on making Dover's SPF geared traction elevators as their own until 2013. Besides that, they continues to make traction elevators and has added machine room less elevators (notably the Synergy) and destination dispatch to their product lineup.

Dover was unique in that they had many independent, local distributors that bought Dover equipment and sold/installed it, usually bearing both their name and Dover's name. These reached their peak in popularity in the late 1960's, which is when Dover began to absorb these distributors and begin installing elevators on a much wider scale. Some companies, such as Burlington Elevator (New York/New Jersey), were dissolved in the mid 1970's. Others, such as Security (New Jersey), Eastern (New England), and Miami (Florida), lasted into the 1980's or 1990's. Some, such as Marshall Elevator (Pennsylvania) lasted well into the ThyssenKrupp years. Others, such as O'Keefe Elevator (Iowa/Nebraska), still exist today as ThyssenKrupp distributors.

Dover Corp. had many distributors around the world. In Canada, Dover was headquartered in Toronto, ON. In the United Kingdom, Dover elevators were distributed by Hammond & Champness from the early 1970s until 1999. Their elevators were branded as Hammond & Champness Lifts, and later H+C Lifts. Dover also had branch in Germany, located in Langenhagen and operate under the name Dover Europe Aufzange GmbH.

Dover also had two overseas representative offices located in Thailand (for the Asia Pacific region) and Mexico (for the Latin/Caribbean region).

Before Dover started manufacturing their own fixtures in 1968, they used GAL fixtures and custom panels. Their standard-issue fixtures by the late 1960's were black buttons with a white halo that lit up and a distinctive indicator with square segments that lit up for each floor. The following listing is of Dover-manufactured fixtures. 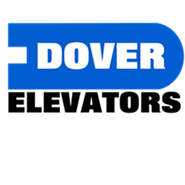 ThyssenDover name.
Add a photo to this gallery

Retrieved from "https://elevation.fandom.com/wiki/Dover_(elevator)?oldid=62718"
Community content is available under CC-BY-SA unless otherwise noted.