Dong Yang was a South Korean elevator and escalator company based in Seoul, South Korea. It was established in 1966 and acquired by ThyssenKrupp in October 2003 and was later known as ThyssenKrupp Dongyang until August 2008 when it is now known as simply ThyssenKrupp.

Dong Yang was founded in 1966. In the early 1970s, Otis established a technical partnership with Dong Yang as a mean of entering the Korean elevator market[1]. They joined Toshiba's elevator division in 1977 as part of a technical partnership between the two companies. As the result, Dong Yang began making elevators under license from Toshiba, bearing the same fixtures, components and even the "CV" model name.

As Dong Yang elevators were manufactured under license from Toshiba, almost every elevator that were produced from the 1980s to late 1990s were basically rebranded Toshiba elevators. 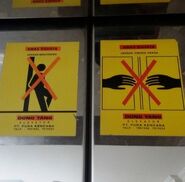 Dong Yang door warning stickers from PT. Pura Kencana, which used to be the sole agent/distributor of Dong Yang elevators in Indonesia.

Dong Yang advertisement in Indonesia, from a 1990 edition of Yellow Pages Indonesia.
Add a photo to this gallery

Retrieved from "https://elevation.fandom.com/wiki/Dong_Yang_(South_Korea)?oldid=62751"
Community content is available under CC-BY-SA unless otherwise noted.